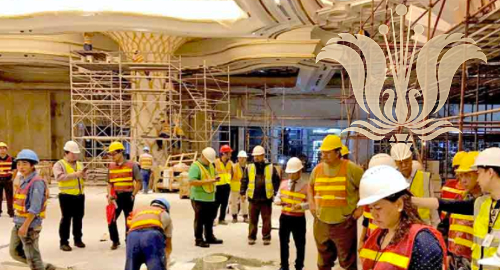 On Thursday, IPI execs met with members of Saipan’s House Committee on Gaming and the Commonwealth Casino Commission (CCC) to update them on the company’s progress on its permanent resort casino, the Imperial Pacific Resort Hotel Saipan. CCC members toured the construction site earlier this week and came away “very impressed.”

The Marianas Variety quoted IPI senior VP of operations Donnie Browne saying construction on the ground floor of the building that will house the new casino is 47% complete and that the casino would ‘soft open’ on March 31, while the adjoining hotel would follow in August.

CCC vice-chairman Joseph Reyes suggested IPI might want to consider extending its lease, given both the unpredictability of the local weather and the importance of IPI’s casino operations to the local economy. Browne rejected this contingency plan, insisting that the new casino would open come hell or high water at the end of March.

CCC TO EXPAND ITS ROLE
Saipan’s House of Representatives recently introduced legislation to give the CCC oversight of more gaming activities. Rep. Joseph Deleon Guerrero’s HB 20-38 would transfer authority for licensing and regulating poker, pachinko and electronic gaming machines from the Department of Finance to the CCC.

Deleon Guerrero said the bill’s intent was to consolidate regulatory authority for gaming under a single agency, suggesting that the CCC “has both the manpower and expertise” to handle the extra duties.

However, the CCC’s Reyes said his group “need additional staff and transportation for 24-7 operations,” including ensuring that poker arcades are complying with new laws requiring them to move out of residential villages. Reyes said the intention behind HB 20-38 was good, “but the bill may need to be refined.”