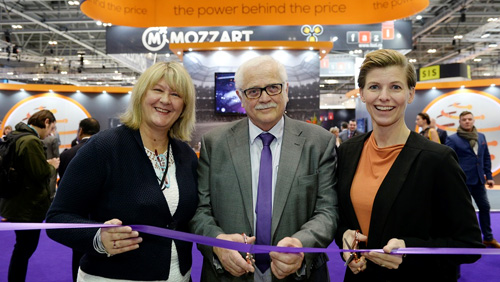 The world’s media assembled at the ExCeL Centre in London’s Docklands this morning for the official ribbon cutting ceremony to mark the opening of the 2017 edition of ICE Totally Gaming. Respected gaming industry journalist David Snook, who is celebrating 50 years reporting on ICE and its predecessors, and Åsa Bredin, CDO at NetEnt and a leading advocate of recruiting more women to senior positions within gaming, had the honour of opening the world’s most prestigious gaming technology event, alongside Kate Chambers, Managing Director of Clarion’s Gaming Division.

Speaking at the event, Kate Chambers said: “David first reported on the premier event in gaming, when it was held at London’s Alexandra Palace in 1967. The industry, powered by advances in technology is now a vastly different business. We are indebted t

o David as we are to the entire community of gaming media for their ongoing support of ICE.”

She continued: “When David first reported on the industry, there would have been little, if any discussion on diversity! I’m pleased that times have changed, if not at the pace that we would all wish to see.

“Diversity is an issue which is close to my heart and that of Åsa Bredin. It is due to the pioneering work of organisations such as Global Gaming Women and the professional achievements of women such as Åsa, who hold positions of real influence, that it is now firmly on the agenda, including at ICE, where Clarion’s Head of Content, Ewa Bakun, has organised a seminar dedicated to the issue.

“The eyes of the world are focused on the events taking place at ICE and the truly amazing technologies that are being showcased by the industry’s leading innovators. I hope that all ICE stakeholders, exhibitors and visitors alike, enjoy another hugely successful edition of what has become the world’s favourite international gaming event.”