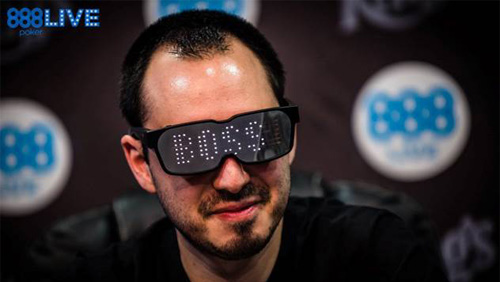 The 888Live Festival Kings Casino is underway, and we bring you the result of the Stacy Matuson vs. Will Kassouf Grudge Match, a High Roller victory by Jonas Kraft, and Main Event news.

The William Kassouf vs. Stacy Matuson Best of Three Heads-Up match was more Jack and Rose on the deck of the Titanic than Mike Tyson vs. Evander Holyfield in the squared circle. Matuson didn’t even get her ear chewed off.

Kassouf admitted to PokerNews sideline reporter Sarah Herring before the match that he had never played Heads-Up before. And it showed as Matuson took him to the cleaners winning the series 2-0.

The match was never going to generate the antipathy that we experienced during their World Series of Poker (WSOP) clash, but it was too friendly for my liking. I would have liked to have seen both players using the needle to create an edge for those watching via the live stream. The needles stayed in the sewing box, and that made the match a waste of time in my opinion.

Matuson even told PokerNews that she liked Kassouf.

Give me a bucket.

Away from the kissing and hugging and the rest of the action has created mixed fortunes for 888.

The €5,300 buy-in €300,000 Guarantee High Roller also cost 888 a few bucks in an overlay. The event only attracted 18 entrants, and three rebuys, leaving the prize pool woefully short of expectations.

Jonas Kraft picked up the win after beating Martin Kabrhel in heads-up action. Only two of Kraft’s 12 cashes have come outside of the King’s Casino, so he knows the layout. His €49,875 first prize was his largest to date. His previous best was a German Championship of Poker (GCOP) victory in 2013 for €34,374.

Ludovic Geilich and Pierre Neuville also made the final table.

There was better news in the €888 buy-in Main Event where 532 entrants smashed the €300k prize pool.

Here are the final table positions going into the final day.