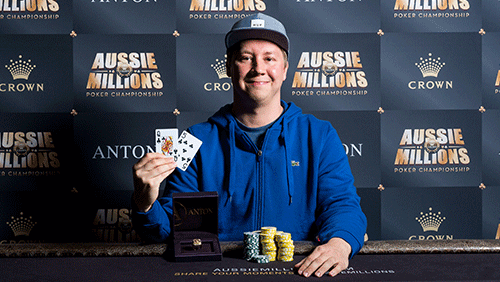 of
Finland was crowned the final champion of the festival at Crown Melbourne. He topped a field of 102 runners, who created a prize pool of AUD$104,550, with AUD$27,710 of that going to the champ.

Konttinen grabbed his third score of the 2017 Aussie Millions and his second five-figure cash of the series after he got fifth in the Tournament of Champions for AUD$13,525. He’s now just a hair shy of $400,000 in overall cashes.

Heads up, Konttinen beat local player Michael Wood, who was one of three Aussies among the final nine. The others were Dean Blatt (fifth) and Amit Shorey (sixth). Blatt was logging an impressive fifth cash of the series, totaling over AUD$40,000. Shorey, meanwhile, was at his third final table, with two sixth-places and a runner-up to show for it, the latter coming in the AUD$1,150 Terminator.

Two of the most accomplished players to make the final table were Slovenian Casey Kastle (fourth), who has over $1.8 million in cashes, and two-time bracelet winner Kristen Bicknell (seventh) of Canada.

DON’T FORGET TO GET BOOK IN EARLY FOR THE 2018 AUSSIE MILLIONS POKER CHAMPIONSHIP, WEDNESDAY 17 JANUARY TO MONDAY 5 FEBRUARY 2018.