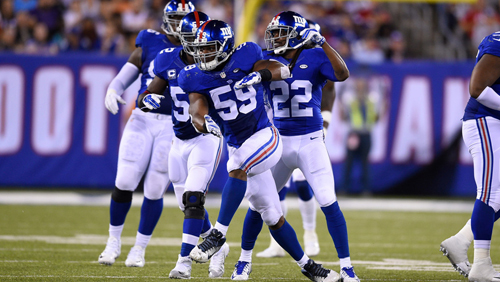 For only the third time in the Eli Manning era, the New York Giants are favored on the road against the Philadelphia Eagles. Odds courtesy of OddsShark.com

The Giants, who are 10-4 SU and 7-5-2 ATS, will face some challenges when they have the ball on Thursday. New York’s offensive line often struggles to open running lanes, and while they have allowed just 21 sacks much of that stems from Manning’s quick release. The Eagles also have some marauding defenders such as DT Fletcher Cox, DE Brandon Graham and DE Vince Curry who can bring pressure from many angles.

Wide receiver Odell Beckham Jr. has averaged 74.8 yards in five career games against Philadelphia. If Manning’s protection is strong, the Giants should be able to take advantage of the Eagles’ pass coverage. Philadelphia lacks depth at cornerback and allows 7.7 yards per pass, seventh-worst in the league.

The spoiler-minded Eagles, who are 5-9 SU and 6-8 ATS, are playing for pride as they try to build momentum for QB Carson Wentz’s second season. Elusive Darren Sproles is expected to play and complement primary RB Ryan Mathews, who had 128 yards against the Baltimore Ravens’ vaunted run defense in Week 15. The Giants have played the run well of late.

The main concern, offensively, about the Eagles is a lack of big-play capability in the passing game, whether that’s attributable to lack of talent or Wentz’s inexperience. The Giants’ trio of CB Eli Apple, CB Janoris Jenkins and CB Dominique Rodgers-Cromartie should be able to limit Eagles WRs Jordan Matthews, Nelson Algohor and Dorial Green-Beckham. Tight end Zach Ertz has actually been the team’s best receiver over the past two games and could be a handful for SS Landon Collins.