The World Series of Poker has released their dates for the 48th annual event. The Colossus III will once again premiere as the first open bracelet event guaranteeing $1m to the winner with all the old favourites expected to return. For professional poker players, Christmas Day is every day for 49 days starting on Tuesday, May 30, 2017. I am, of course, talking about the World Series of Poker (WSOP) and the organisers of the most prestigious and longest running festival of poker in history have released a few critical dates ahead of the annual turkey hunt.

As is bog standard these days the opening event will be on Wednesday, May 31, 2017, when the casino employees will attempt to win a bracelet in the $565 (single re-entry) No-Limit Hold’em event. That date marks the beginning of a 49-day odyssey where the poker never ends, with tournament buy-ins as low as $75.

As was the case in 2016, the 48th Annual WSOP will start off with a bang. The first open bracelet event will be Colossus III. The world record event that gives punters the opportunity to parlay a $565 investment into a $1m dream come true. The game begins over the weekend of 2, 3 & 4 June, with the opportunity to re-enter into two starting flights per day over the three days.

In 2014, the inaugural Colossus event attracted a record 22,374 entrants, with Cord Garcia winning the $638,880 first prize. Last year Benjamin Keeline beat 21,613 candidates to win the $1m first prize. The $1m guaranteed first prize will also be in situ for the Colossus III. 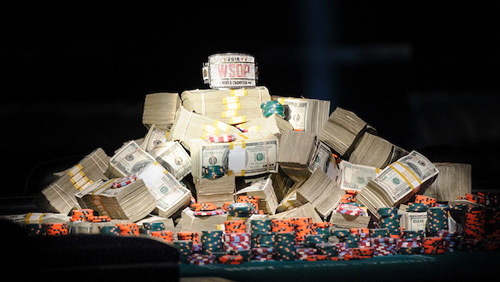 Although the full schedule is still under wraps, the WSOP team did reveal the return of the Millionaire Maker, Monster Stack, Little One for ONE DROP and the Ladies Championship. The popular $1,000 Seniors Event will take place Friday, June 16 for players aged 50 or older. The event will adopt a single re-entry ruling.

888Poker remains WSOP’s primary partner, and online qualification for WSOP events will be available on WSOP.com in both Nevada and New Jersey.

You can expect the full event-by-event schedule in February 2017 but Ty Stewart says to expect much of the same as last year ‘with a few wrinkles.’