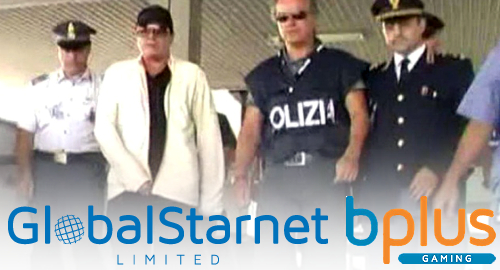 A man dubbed Italy’s ‘King of Slots’ has been arrested in the Caribbean on charges of money laundering and tax evasion.

Tuesday brought word that police on the Netherlands Antilles island of Sint Maarten had arrested five individuals on charges of conspiracy to commit tax evasion, money laundering and embezzlement.

Among the individuals clapped in irons at the behest of Italian investigators was Francesco Corallo, the Sicilian native behind a sprawling gambling empire. Also under arrest are former Italian legislator Amedeo Laboccetta and Dutch national Rudolf Baetsen.

Corallo’s business interests include the Atlantis World Group, which operates casinos in Sint Maarten, Curacao and the Dominican Republic. Corallo also controls Italy’s B Plus Gaming, which last year changed its name to Global Starnet Ltd, although B Plus remains the B2C brand.

B Plus operates video lottery terminals in Italy as well as numerous online gambling sites. B Plus received its Italian gaming license in 2004 and eventually grew to account for nearly one-third of Italy’s total number of VLTs.

The indictment unsealed on Tuesday says Corallo’s businesses were involved in complex financial maneuvers intended to shield his gambling proceeds from Italian tax authorities. Between 2004 and 2014, the indictment alleges that Corallo and his associates hid over €250m by funnelling it through UK and Dutch bank accounts before transferring the funds to Caribbean companies.

Following the arrests, Global Starnet issued a statement saying the company has, since it began offering gaming in 2004, “always operated within the rules” and paid all taxes as required by law. The company also said it was business as usual at its gaming operations.

Italy has been taking more aggressive steps to rein in its gaming industry, which the authorities have often linked with the country’s organized crime groups. In 2015, Italian authorities took down Malta-licensed Betuniq for allegedly laundering money derived from 82 online gambling sites and 1,500 internet betting cafés.

CORALLO’S COLORFUL FAMILY HISTORY
Corallo’s father Gaetano has had his own brushes with the law, having been convicted of corruption a few decades ago related to shenanigans at an Italian casino. Ironically, Corallo Sr., who turned over his Caribbean casino operations to his son when he returned to Italy to address his legal woes, is suing his son for up to $20m for casino revenues that dad believes are rightfully his.

Italian authorities have been seeking the younger Corallo’s arrest as far back as 2012 over questionable bank loans that B Plus used to buy VLT licenses from the Italian government. Corallo denied having bribed the BPM Bank to grant the loan and claimed B Plus was the country’s second largest taxpayer behind auto giant Fiat.

The Italian authorities’ case may have been strengthened by the fact that Corallo’s name surfaced in the recent release of the so-called Panama Papers, which shone a light on the previously opaque dealings of the rich and powerful in the murky world of shell companies.