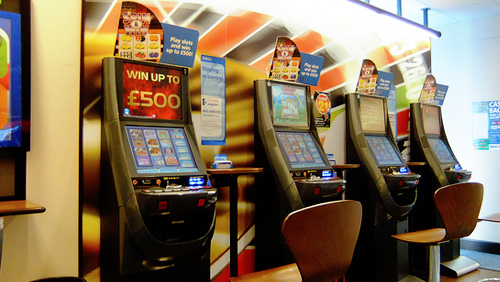 The Welsh Government are seeking responsibility to govern the regulations surrounding Fixed Odds Betting Terminals, taking control from Westminster, after issuing an amendment to the Wales Bill.


I live in a country called Wales. It’s not a part of London, as many Las Vegas poker dealers seem to think. It’s two hours from London and if you were a spaceman looking down from the ISS then it’s the one that looks like a pig’s head.

Many notable stars have come from Wales.

Anthony Hopkins, the guy who likes to eat human liver with fava beans and a nice Chianti, is from Wales. Michael Douglas’s wife, Catherine Zeta-Jones, is from Wales. Tom fricking Jones is from Wales. And as a Moroccan football shirt salesman once reminded me during a trip into the depths of the souk in Marrakech “nothing happens in Wales without Ryan Giggs say-so.”

And since 1999 it is also a country with its own government, and they are about to be handed powers to manage what many politicians believe to be a problem with their Fixed Odds Betting Machines (FOBTs).

Overall responsibility for gambling regulation lies within the place that Guy Fawkes failed to blow to smithereens back in 1605. However, in recent years powers to manage regulation concerning FOBTs has been devolved to Scottish Parliament, and the Welsh have their Oliver style begging bowls out asking for the same luxury.

Last month, Swansea East MP, Carolyn Harris, told the BBC that the FOBTs were capable of eating ‘£100 every 20 seconds and £300 per minute.’

“The machine doesn’t give the punter, as they like to call them, the opportunity to stop and think about what they’re doing. It’s so rapid, it’s literally pressing a button.” Said the Swansea MP.

Harris has some backing in the shape of Mair Eluned Morgan, the Baroness Morgan of Ely, who tabled an amendment to the Wales Bill seeking the power to manage their local FOBTs ‘problem’ locally.

Going through the amendment, Lord Griffiths of Burry Port, called it a ‘dogs breakfast,’ before going on to say that his concern with FOBTs was their exposure to children (the last I looked, children were banned from bookmakers shops). He also admitted that there was ‘no empirical evidence’ on the amount of money the FOBTs generate or how problematic they are.

When talking about the subject of devolving responsibility for FOBTs away from Westminster and into the Welsh Government, Lord Griffiths said the matter was not ‘rocket science.’

“It seems logical to invoke the principal of subsidiarity so that control of this aspect of gambling should be as near to where the gambling takes place as one can conceive of.” Said Lord Griffiths.

Lord Bourne of Aberystwyth (Christ this sounds like a Game of Throne script) said that he would ‘look at the issue and reflect on it.’

I wonder what Ryan Giggs has to say about it all?