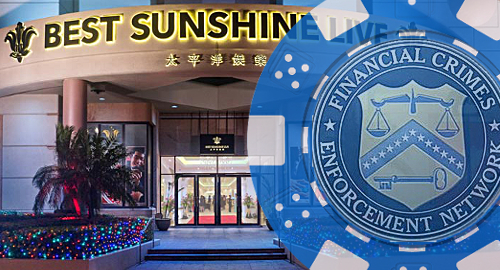 On Sunday, Bloomberg ran a feature report on the success of Imperial Pacific International Holdings’ temporary casino Best Sunshine Live. The property has posted some truly impressive VIP gambling figures in recent months, including back-to-back months of nearly $4b in VIP turnover.

However, Saipan is part of the Northern Mariana Islands (CNMI), a commonwealth of the United States, and Bloomberg’s sources claim that the US Treasury Department’s Financial Crimes Enforcement Network (FinCEN) has “taken notice of the activity” at Best Sunshine.

Best Sunshine currently boasts only 16 VIP tables, but each of these tables generated daily revenue of $170k over the first half of 2016, dwarfing the returns of tables in some of Macau’s major integrated resorts. Further highlighting this discrepancy, Bloomberg quoted a local activist describing Best Sunshine as “a duty-free store with a fresh coat of paint and some chandeliers.”

Imperial Pacific CEO Mark Brown told Bloomberg that his company operates in a “very transparent” manner and that Best Sunshine’s VIP figures only seem high because (a) many tables in Macau casinos are underutilized, which drives down their average revenue, and (b) Macau casinos are underreporting their own figures to keep profits off the books.

Brown says his company has a roster of about 750 high-rollers who have accounted for the bulk of Best Sunshine’s revenue and that, while the company was unaware of any financial probe, it was nonetheless beefing up its anti-money laundering protocols.

FinCEN’s potential involvement cannot be dismissed, as the watchdog has already come down hard on another CNMI casino operator. In 2015, FinCEN slapped a $75m fine on the operator of the Tinian Dynasty Hotel & Casino for “willful and egregious violations of the Bank Secrecy Act.” Tinian regulators revoked the property’s license the following year after its owner filed for bankruptcy.

Fortunately, Imperial Pacific’s board of directors has added some US governmental heavy hitters over the past year, including former Central Intelligence Agency director James Woolsey and former senior US military judge Eugene Sullivan. Imperial Pacific said the additions were intended to “enhance its integrity.”

Imperial Pacific’s permanent Saipan casino is currently under construction, with the first phase expected to open in February 2017.