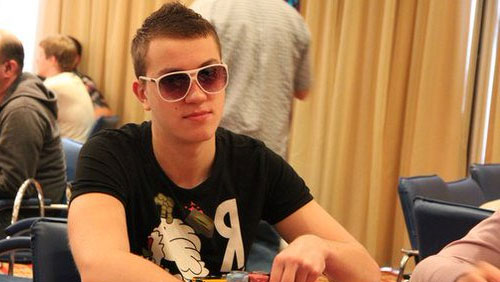 Lee Davy sits down with professional poker player and effective altruist, Roman Romanovsky, to talk about his latest charity marathon, the influence of Scott Alexander, and how he intends to do his bit to change the world.

With the world looking ever more damaged and corrupted the easiest way to process is to close our eyes. Romanovsky peels his open Clockwork Orange style. At 25-years of age his levels of maturity and willingness to take action where most don’t is incredibly inspirational.

During this 30-minute interview, I question Romanovsky on the genesis of his charity marathon, the men who have influenced him the most in life, and what advice he would give to other poker players who are interested in following his lead.

Start by talking about your current challenge, where the idea come from?


“It started because I had a vacation between Jan-Aug and during that time I was figuring out what was happening in the world. In the end, I realised the world was in a bad situation, and I wanted to make a difference in changing that. After that, the only thing I wanted to do was making the biggest impact that I could in the world.

“Most of the population don’t have any idea of what is going on in the world; they don’t have time, or they can’t afford it. Personally, I don’t think anyone in the world is guilty in anything. They are victims of circumstances – environment, nurture, education. The universal laws of causality make us who we are. Only when we realise that can we get over it, understand what is happening and learn about the universal law of causality and life.”

How does a 25-year old start thinking this way?

“It’s just my personality and the genes passed on by my parents. Then as I said before the right blend of nurturing, education and life’s circumstances just by pure random luck got me there.”

When you had that period of reflection, what was it about the world that you didn’t like?


“It was human suffering.  After that even I started to think about suffering in animals. They suffer a lot more than humans do because there are a lot more of them. After that, I was thinking why is all of this happening? Then I found Slate Star Codex a blog run by Alexander Scott one of the most intelligent and rational human beings on earth.

“He had a brilliant article. It is my favourite article of all time, and I have never read anything so beautiful and so smart. It’s like poetry. It’s called a Meditations on Moloch.”

Why did the meditations have such an effect on you?


“He made the Universal Laws of Causality as an entity. It’s important to have an enemy you can fight. When you realise, they are universal laws you give up. But he put it as an entity that you can fight against. The Moloch by Alan Ginsberg was questioning what is The Moloch? A lot of guys ended up saying it’s Capitalism, which is a significant part of it, but not all. In his opinion, he believes the overall universal laws of causality for human beings are pretty bad. People are following incentives, and because of that, all the bad things happen. We follow them and can’t get out of that mentality.

“After that article, I started to think about Artificial Intelligence which I believe can be a massive disaster. Scott had a few articles on AI and Nick Bostrom is one of the most progressive thinkers on this topic. Also, WaitButWhy is a great blog. The other point I started to understand slightly, but not in too bigger detail, was climate change. Less than a week ago the Leonardo DiCaprio documentary Before the Flood was released and brilliant. And the other movie I like is The Home by Yann Arhus-Bertrand.”

How did you transition from ‘learning’ to taking ‘action?’

“I needed to figure out how I could do the most good for now at least. It was also important to have some financial security for myself. I give a lot of money to charity, but I also need a safety net. It was pretty obvious for now that I should play as much poker as I can for the next couple of years. That is the most rational thing to do.”

How is the charity marathon progressing?


“I have started a challenge with no time limit starting with $66,000 bankroll, and I want to turn that into $666,000, so $600,000 profit with $400,000 going towards charities. It’s not going to a charity instantly. I will take a couple of years and maybe run another marathon and then combine about one million to pool to charities and take a couple of years to figure out what is the best way to use that money because it’s a hard question. Charity is a super complicated question.

“Will I donate to cure 1,000 people who are blind or save 10-50 lives? Should I choose between the Ice Bucket Challenge or saving children from cancer or whatever disease that will cost $100k – $1m to save one life? Or should I donate to save a life for $3,500 with the Against Malaria Foundation? That’s the difference between cost-effective charities and random charities. It’s a complicated and tough question.

“The bankroll challenge is currently up to $207k+. There are at least 22 guys who joined me in the Russian Forum GipsyTeam, and there are also guys who have joined through 2+2, so I would say at least 30 guys have joined me.”

William MacAskill donates everything he earns over £20,000 to effective charities. How do you process that when it comes to defining what is the most good you can do?

“That’s the question that came up quickly. Once against Scott Alexander saves me. He has an article: Nobody is Perfect Everything is, Commensurable and he explains that it’s impossible to be perfect. To be perfect, you would have to spend live on $5-10k as well calling your mother and grandmother every week t donate, doing all the demands, etc. It’s impossible. Having a goal to do the best you can is very good.

“Another thing that helps a lot is Schelling points. He donates 10% of his income because he said if everyone gave 10% it would be something like $6.5 Trillion per year for charity and in a few years, we would eradicate all disease and poverty. Even if we discount the people who can’t donate even in the poorest areas, it won’t make a big difference. If the richest guys donate 10% its more than enough. If I join Giving What We Can, like he did, there is a 10% yearly donation of your income. He is saying I am taking my hands off the wheel. I have done my part.

“The Schelling point makes you free of that burden and thinking about you are not perfect and doing everything right. I am not saying 10% is correct, but it’s the concept that’s important. The other important thing he wrote about is if we are not going to have Schelling Points everyone will feel miserable about not doing a thing, and nothing will happen. The point system will make you happy that at least you have done something.”

Is it more difficult for poker players to donate to charity because of their fluid bankroll situation?

“I am making the goals with no time limit. I make $600k and give $400k. That gives me $200k, and I have other money saved. The next marathon I might start with $100k. If I go on a streak with $7ok and am left with $3ok, I will change my bankroll strategy. I normally follow 800 average buy-ins, so it’s pretty conservative bankroll management.”

Does the challenge make you play differently?

“I play the same, but I get the motivation to work harder off the tables. I was never the guy who allowed emotions to result in bad decisions.”

The One Drop has raised something like $18m for charity over the past few years, how does that make you feel?

“Not great but I accept that humans are super irrational at the beginning. We weren’t built to care about addicts, charities and altruism. Ok, altruism to a certain degree but it, wasn’t an overarching goal. So I am sad about it but there is nothing to do so why should I let it affect me?”

What would you say to poker players who are thinking about giving to EA but are not quite sure how to get involved or believe that they can’t afford it?

“I would make it slightly broader. First of all, humans have a huge deficit in self-confidence. They think that guy has so much talent and I wasn’t born with it so I can’t reach that level. Any guy can make at least $100k – $200k in poker if they put enough effort in -Mtts although I am not so sure with cash.

“Even if they have self-confidence they are trying to find an easy way to get through life. It’s a laziness we are born with. Consider the possibility to make as big of an impact as they can. If they think deeply about that they will understand that watching some stupid TV show, watching some social media for no reason – wasting time is not a great decision. Knowing you are doing the best you can make you more focused, motivated and you can do everything you thought you couldn’t The goal is to spend less time on useless things and more times on more important things to drive further motivation.

“Think more deeply about that at the start, and then you will end up doing better in life and poker. Cut down that useless time and focus on helping the world and happiness and motivation follows.”