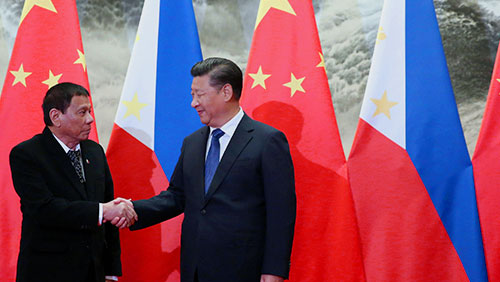 Two weeks after Philippine President Rodrigo Duterte’s State Visit to China, listed gaming companies are bullish to the prospect that more mainland Chinese tourists will come to the island nation to play.

Philippine Star reported that gaming firms are now punting on the windfall of President Duterte’s trip to China. During his state visit to the mainland, Duterte has brought with him a 400-strong business delegation with hopes to secure new investments and chalk up some new business ventures.

Belle Corp. Vice Chairman and Executive Director Willy Ocier expressed optimism that more Chinese tourists will visit the country after the frosty relationship of Manila and Beijing has been thawed.

Aside from the gaming industry, Ocier predicts that tourism and dining will benefit from more Chinese visitors.

“We are optimistic that visa requirements would be relaxed for visiting Chinese tourists to the country,” Ocier said. “We hope some tourists will find their way to our integrated resorts for their dining and entertainment experience as well.

The market research firm said Bloomberry and Melco Crown stand to benefit more as they are geared toward servicing the VIP market.

“China is now the Philippines’ third largest visitor market, accounting 12 percent of total tourist arrivals during the first eight months of 2016. The value of Philippine exports to China has also grown at a CAGR of 4.2 percent during the past 10 years making it our third largest export market with a 10.9 percent share in 2015,” COL Financial said.

Justino Calaycay of A&A Securities said the state visit to China would indeed boost tourism in the Philippines among other sectors.

Statistics showed that the number of tourists coming from China to the Philippines rose by 19.2 percent in the past four years. For this year alone, Chinese tourist arrivals jumped 50.3 percent to 484,567 from January to August.

“State visits to China and Japan have brought billions of dollars of investment pledges. Philippine government officials say the funds will flow to important sectors and that should boost the economy further – education, agriculture, health, infrastructure and tourism, among others,” Calaycay said.