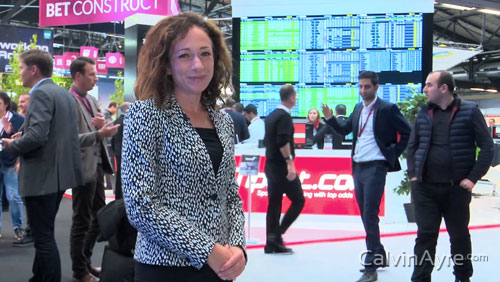 EiG 2016 has officially kicked off and for the next three days online gambling professionals from around the world will be together at the Arena Berlin.  The main focus of this event is the future of the iGaming industry and a number of the sessions have been dedicated to this subject.  Plenty of the exhibitors are also promoting products and services optimised to serve the industry’s future, for example in areas such as eSports, VR and live betting.

EiG exhibitor RTSmutiny is an eSports analytics company focused on analysing, predicting and researching eSports matches.  RTSmutiny provides live odds for League of Legends, Dota 2 and CS:GO and serves these odds to betting companies and fantasy leagues.  Here at EiG 2016, RTSmutiny has a big booth and brought along two professional eSports players to demo gameplay for delegates and compete against those who are willing.

Last year the RTSmutiny was on display in the EiG start-up village and did not have the funds to participate in The Pitch, but despite their minimum presence, the company received seven offers for investment.  Fast forward one year and RTSmutiny’s CEO Pavol Krasnovsky told CalvinAyre.com the company has expanded exponentially, a true testament to how quickly the eSports sector is growing.

Another area of massive potential for the online gambling industry (and the rest of the world, in fact), lies in crypto-currencies such as Bitcoin.  Niels Kerstholt of Bitpay, a payment processing company facilitating transactions in Bitcoin to fiat currency and vice versa, identified EiG as a perfect event to attend and educate the industry on how accepting Bitcoin will simplify payment processing.

Bitpay recently announced a new deal with Netbet, the first operator licensed by the UK to offer Bitcoin payment options to customers.  Kerstholt elaborated on this deal and what a big step it was for the online gambling industry, indicating that operators are finally beginning to recognize customers want the option of spending and receiving in Bitcoin.  He also added “things will get really exciting” when suppliers and affiliates in the industry start taking advantage of Bitcoin as foreign exchange fees have traditionally been a pain-point for both sectors.

EiG’s sessions have been divided into three areas at different corners of the expo floor this year, “Intersellar 2026”, “Mission Control 2016” and “Capsule”. Over at the Capsule, 25-year iGaming expert Christina Thakor-Rankin participated in “The F Session”, a panel dedicated to how companies can learn from their mistakes.

“You name it, I’ve done it.  I have seen a lot of F-ups, some spectacular, all without question, valuable”, said Thakor-Rankin, Principal Consultant, 1710 Gaming.

Employees are scared of failure and expect the boss to try and identify someone to blame, so everyone goes into defensive mode and starts looking for excuses on why its not their fault, explained Thakor-Rankin.  When this happens, the wrong people get blamed and prevent the more productive focus on why the failure happened and how to avoid it in the future.  “Communication is key, its a cultural change”, she said.

“As an industry we have to be more open to failure- historically its always been about success and making things happen and work.  The industry is congested and fragmented now, we can’t take success in the UK and replicate it in other parts of the world”, she said.

Sven Ivo Brink, Owner of brink:digital and former CEO of mybet, moderated the panel and said its good to have a “warning system” in place, so if the amount of contacts to customer care are abnormally large, the organization is alerted early on and can quickly identify any issues if they exist.  He also made the point that customers understand if a company is having a failure, its now they respond that really matters.

Brink also put forth the suggestion of sending out anonymous questionnaires internally to ask employees about points of failure within the organization.  Like Thakor-Rankin, he said its important to be open and honest about failure and to learn from it rather than look for blame.  “Change is part of the business and when you are in a state of change, failure is inevitable”, he said.

Over at Mission Control this afternoon Will Whitehorn, former President of Virgin Galatic and 25-year employee of Virgin, delivered a presentation on innovation and how to manage risk within an organization.

Whitehorn explained how Richard Branson’s dyslexia actually helped him in his creation of new businesses as he viewed the world and its problems in simpler terms than “normal” people and had no fear of failure.  “He created a culture in Virgin which led to it becoming an extremely innovative company in the 1980s”, Whitehorn said.

“Learning to manage risk is one of the most important things in creating an innovation culture.  If any company is going to innovate, you have to give up the innate fear of failure”, he added.

When it comes to innovating within an organization, Whitehorn emphasized the importance of taking care of your employees first, even before shareholders, as loyal employees lead to happy customers which will increase profits and then benefit shareholders.  He added being the cheapest option doesn’t always equal success, you need quality too.  “Whatever you do in any innovation you have to combine quality with money.  You must build up quality, reputation and trust”, he said.