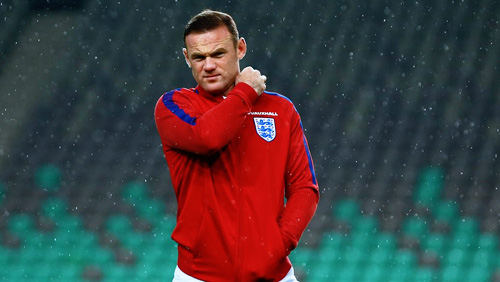 Gareth Southgate has dropped Wayne Rooney for their crunch tie away in Slovenia prompting Paddy Power to axe the odds of him retiring from international football from 33/1 to 3/1.

When the Football Association (FA) appointed Gareth Southgate as England’s interim manager, two questions immediately popped into my mind replacing the recurring image of him missing THAT penalty in 1996.

1. Will he command respect from his senior players?

And then I thought about it a little longer.

The only so-called ‘senior player’ in the England set up is Wayne Rooney. Southgate immediately installed him as his captain and then promptly dropped the man for his most important game of his four-match tenure. I doubt his decision commands respect from Rooney, but it does show that the man who looks like a mouse does have some bite.

One of Southgate’s first decisions as the interim manager was to ensure Rooney kept the armband. I understand why he made that choice. He knows he may not be around in five games time and so to displace the Manchester United legend, only for the next manager to perhaps reinstate his captaincy, would only serve to ridicule the man, but he has created a rod for his own back.

If the FA hand Southgate a permanent contract, and Tuesday night’s encounter in Slovenia will go some way towards confirming that, then he will find himself in the unfortunate position of naming a man as his captain who seems unlikely to break into his starting eleven.

Southgate has dropped Rooney for the Slovenia tie. Jordan Henderson will replace him as captain. Eric Dier returns to his anchor role in midfield. Speaking at a press conference ahead of the game, Southgate said the decision was ‘tactical.’

Rooney doesn’t start for England because on his current form he is not good enough and it’s been that way for solid 12-18 months. Whether or not Southgate made this decision to show the powers to be that he has a backbone, is irrelevant. It was the right thing to do.

Watching Rooney Zimmer-framing around the centre circle, you can’t help but wonder if he is past it until Wiki reminds you he is 30-years old. Theoretically, Rooney should be in his prime. And yet he seems to be drifting further back, and playing the type of football I can only describe as ‘comfortable.’

Has he lost his desire?

Does he look around and see the young whipper snappers breezing past and doesn’t know how to react?

Has the fact that he started out so young finally caught up with him?

I imagine it’s a combination of the three.

Wayne Rooney should be good enough to play in midfield, but he isn’t proving his worth. If you watch the performances of Jordan Henderson, Dele Alli and Rooney against Malta, only two of them were driving the team forward, and Rooney wasn’t one of them.

When Paul Scholes burst onto the scene for United, he was a centre-forward who was banging the goals in for fun. The step up in class proved too much for the little ginger lad, and Sir Alex Ferguson instead used him in a central midfield role. He excelled. Xavi once called him the greatest footballer in the world.

Rooney is following a similar path, albeit a lot further down the career continuum, but doesn’t have the ability that Scholes had. Scholes passed the ball forwards, drove the team on, and scored a bucketload of important goals because he always found himself in the box. Rooney has forgotten where the penalty area is, and although he has a lot of touches, they are sideways and backwards.

At 30-years of age, Rooney will have to leave United if he is to enjoy his last 4-5 years in the game. If his future is in central midfield, and he wants to continue to represent England, then he will have to drop down in class and play for an Everton or West Ham type team.

He won’t leave in January. He is three goals behind Bobby Charlton’s United goal scoring record, and he won’t want to leave until he has earned that honour. But there is no way that Rooney will be at United come 2018. I also don’t see a way back for him with England. Retirement is the most honourable way out and Paddy Power recognise that slashing his odds of retirement from 33/1 to 3/1 in the build up to his appearance at the England Press Conference on Monday.

The bookies make him 11/8 to keep his job, and I think his decision to drop Rooney will prove to be crucial if he is to prove them right.