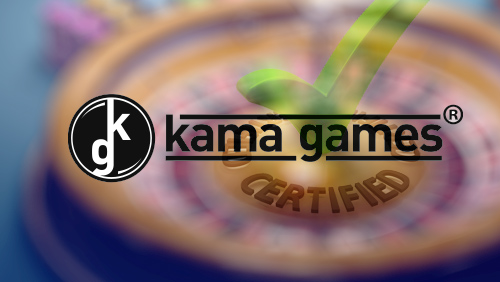 This certification puts KamaGames in line with many of the world’s leading real money operators and puts them at the forefront of the social casino industry.

KamaGames’ RNG is a propritery solution which is at the heart of all of their social casion titles. According to iTech Labs certification process, the numbers generated by this RNG, which are in fact the cards being dealt to the players at the tables, have passed Marsaglia’s “diehard” tests for statistical randomness.

During the extensive certification process, iTech Labs evaluated card shuffling without a joker (single deck, two decks, four decks, six decks and eight decks) and also scaling for roulette games. The shuffling/scaling tests were conducted at scale to give the calculations sufficient statistical power which resulted in iTech Labs certifying that card and number sequences across the entire KamaGames portfolio are “unpredictable, non-repeatable and uniformly distributed”.

A spokesperson for KamaGames Studios said “We have always strived to give our players a fun and fair gaming experience and are proud of all of our titles and of our proprietary technology. This formal certification really shows that all of the games our players are enjoying every day are setting the industry standards for fairness”.

About KamaGames
The KamaGames Group are global developers and publishers of social casino hits designed for mobile, social, consoles and smart TVs.
Established in 2010 and employing over 220 staff, the KamaGames Group has its corporate headquarters in Dublin, Ireland as well as offices in London and Dubai. The group is also present either directly or through its network of partners in all global markets including USA, Europe ASIAPAC, the Middle East and CIS countries.
Bringing together creativity, proprietary technology and a passion for games, KamaGames has built a portfolio of premium social casino games designed to deliver real-life entertainment to the masses. KamaGames’ Random Number Generator (RNG) is certified by iTech Labs and meets the highest standards to guarantee fair play.
KamaGames portfolio is localised into 29 languages and reaches over 81 million gamers worldwide with over 1 million daily active users.
The flagship game, Pokerist(R) Texas Poker, was named one of the Best Apps of 2012 by Apple, was the #1 Top Grossing App on the Apple App Store in 89 countries as well as being in the Top 5 Google Play Grossing Apps in 24 countries.