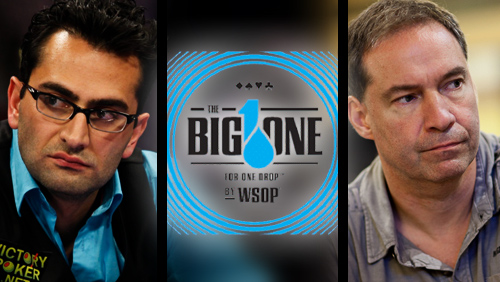 3-Barrels of pure value including an appearance at an 888Live Festival event for Antonio Esfandiari; One Drop side events news, and Ted Forrest legal wrangle update.

Last week, the second largest online poker room in the world declared their intention to increase their presence in the live tournament circuit, with the announcement of three 888Live Festivals per year.

The first will take place at Aspers Casino, Stratford, UK October 13-23. There will be a broad variety of tournaments including a £880 buy-in Main Event and a £2,000 buy-in High Roller.

888Poker Ambassador, Kara Scott, will act as host and her fellow ambassadors Chris Moorman, Dominik Nitsche, and Sofia Lovgren will also add star value to the festival, and they won’t be alone.

888Poker is flying Antonio Esfandiari into London to compete in the event, and there will be an announcement during the dinner break of the first day of the Main Event to ‘celebrate a secret project,’ making me wonder how involved the Magician will be in the future of 888?

One Drop to Feature High Stakes Cash Games & Side Events

Antonio Esfandiari has always been a star, but his victory at the inaugural Big One for ONE DROP sent his status supersonic. He won over $18.3m that day, but he might not get the chance to repeat that feat after the ONE DROP founder, Guy Laliberte, took the decision to bar professional players for competing in the 2016 event scheduled to be held in Monte Carlo Oct 13-17. So instead of jetting off to the principality for champagne and oysters, he heads to London for fish & chips.

Although the pros can’t compete in the €1m buy-in event, they will be able to compete in high stakes cash games, and eight side events recently announced on cardplayer.com.

Here are the juiciest pieces of meat on that particular bone.

In addition to the tournaments, there will also be a High Roller Cash Game on Monday, 17 Oct carrying a €1m buy-in.

Last week, we told you that Clark County Chiefs had issued a warrant for the arrest of the six-time World Series of Poker (WSOP) bracelet winner, Ted Forrest.

In an update, we can inform you that he went in front of a Las Vegas judge on Thursday, and was allowed to roam free without bail. The next step is a preliminary hearing on Oct 18 to determine whether there is any merit to the case moving upwards to state court.

Amongst the penalties handed out for writing bad checks is a 14-year jail sentence, but when a young rapist only serves three months of a six-month prison sentence, one doubts Forrest will face any time eating porridge and worrying about picking up a bar of soap in the shower.

The charge levied at Forrest is failing to repay debts to the Wynn in Las Vegas in October 2012 and May 2013. His legal team insist that Forrest has no crime to answer for and that the case is a civil issue.