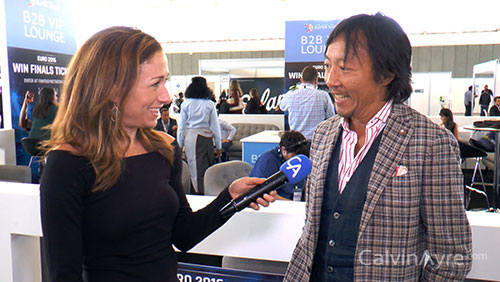 In this interview with CalvinAyre.com’s Rebecca Liggero, Mitsuya Fujimoto of Ganapati tells us why Japanese gaming technology transcends beyond all nationalities.

Japan has always known for being an island nation full of contrast. While it is known for successfully preserving its rich culture and historical heritage, the island nation is also recognized as the world’s key innovator in digital technology.

Asia’s land of the rising sun has also marked itself in the global pop culture. Nowadays, people across the  Pacific Ocean are engrossed to watching Japanese animation or reading Japanese comics known as mangas.

Even Hollywood has adapted several Japanese stories into movies, such as Godzilla, Pacific Rim, and the horror-flick The Ring. Just recently, the world went crazy over PokemonGo, which originated from a Japanese comics.

“The globalization of entertainment is obvious. Everybody loves everything. It’s not just for Hollywood. It’s not just  for UK,” Mitsuya Fujimoto of Ganapati told CalvinAyre.com. “Japanese assets like anime, manga are very popular, penetrating the European market.”

The way the world accepted and embraced the Japenese heritage and pop culture, according to Fujimoto, gave them an idea to infuse these things into an online gambling technology.

He said that the games that their company are actually creating for the European market are based on Japanese animes and mangas.

When asked whether their company will be creating a gaming technology for Asia that is different to the technology they will offer in Europe, Fujimoto pointed out that gaming technology should transcend beyond ethnicity and must be enjoyed by all and not for a specific race.

“Well, I think we cannot stop. There’s no border in this world. I think – Europeans, Asians, Americans – It doesn’t matter. I think our assets would appeal to any nationalities wherever they are.” he said. “Maybe especially Asians. They are used to our contents or how we draw it. It’s a cultural thing they are accessible.”

In their company’s pipeline, Fujimoto pointed out that they will be concentrating on the fighting, battle games, quest games, and ninja type of games.

“Whatever the westerners would think what the Japanese are all about,” he said, adding that they will be adding new characters in the market on the second or third year.

“The response I’m getting is more than what I’ve expected. We have never shown a single game because we thought we come here to show our plans first,” Fujimoto said. “But they’re like all over us and it is really exciting.”