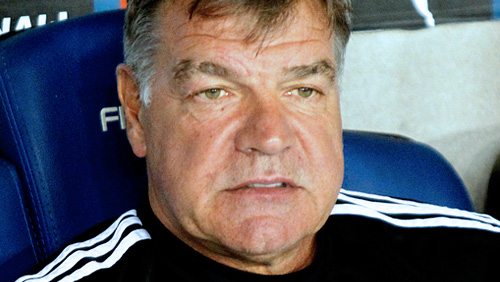 After Sam Allardyce is given a two-year contract as the new manager of England, Lee Davy opines about the lack of English managerial talent in the game and why the Premier League is to blame. As I run around the neighbourhood in Tujunga, Los Angeles, I wonder why everyone has an American flag outside their home? What value does it serve?

I don’t see Mexican flags or Union Jacks. “It’s national pride.” Says my wife. And that’s why I don’t get it. The only sense of pride I have as an Englishman is when my national football team plays. I stand up and sing songs about a monarchy I don’t understand. And I get really, really, upset when they lose all of the time, often directing xenophobic f-bombs through the television set against the opposition that has just beaten us yet again. It hurt when we lost against Iceland. It hurt even more because I was in Los Angeles at the time and nobody gave a shit. It didn’t matter who I spoke to; nobody understood how unbelievable it was that England could lose against Iceland. It was the equivalent of the Cleveland Cavaliers losing against an employee 11 that work at Willy Wonka’s Chocolate Factory. Roy Hodgson quit, and I was glad because I didn’t want a 60+ veteran in charge of my national side. The search for his successor began. The bookmaker’s selection bias had a very Brexit feel to it. The overseas options included Arsene Wenger, Jose Mourinho, Mauricio Pochettino and Slaven Bilic. All were 33/1, but you might have well made them 5,000-1. Why would they want the England job? The England U21 boss Gareth Southgate was installed as the immediate favourite at 6/4. The thought made me shudder. Zero experience. Alan Pardew was 10/1, the man who had just finished the season watching his Crystal Palace side dropping down the Premier League table like a large piece of lead. Eddie Howe was 8/1 but was a combination of Southgate and Pardew. And that was the best England had to offer. It was nothing short of a joke. The outsider list was even more ridiculous. Harry Redknapp 16/1 Sam Allardyce 25/1 Sean Dyche 33/1 When searching for the successor Martin Glenn assured England fans that they were not looking for a short-term solution. They wanted a long-term answer to the English national side’s quite obvious problems So I was scratching my head when they appointed Sam Allardyce, a 61-year-old who immediately named 57-year-old Sammy Lee as his right-hand man. Long term? I’m sorry, but I don’t see Big Sam as being the future of English football. Why Not Big Sam? Sam wasn’t a successful footballer. While that doesn’t mean he can’t be a great coach, Big Sam is hired to get Championship sides promoted, and to stave off relegation for struggling Premier League sides. He is so under qualified for the shoes he is about to step into it’s unreal. I thought the same with Roy Hodgson, and I feel this appointment is even worse. West Ham sacked him because of his playing style. He has a 39% win percentage. Jose Mourinho once said that his style of football came from the 19th Century. And he has two years to turn a bunch of prima donna losers into World Cup winning material. And let’s go beyond that point into the realm of Martin Glenn’s long-term thinking. Who replaces Big Sam? Sammy Lee? The one shining light about Hodgson’s reign was the appointment of Gary Neville. There was structure. I could see a future. It’s what Sir Alex Ferguson should have done before he retired at Man Utd. Instead of appointing Mike Phelan, he should have named Ryan Giggs. That would have been a plan for the future. This is no blueprint. It’s a decision that smacks of a lack of choice. What’s The Problem? We were always going to find ourselves in this position, and to be honest; I am surprised it’s not worse. The success of the Premier League has crippled the English national side. The instant gratification model that pans out before ours eyes leaves little room for the talented English youngster versus some professional who scored a few goals for a French Second Division side. It’s even worse at the managerial level. Only 3 of the 20 Premier League clubs has an English manager at the helm (Alan Pardew, Sean Dyche and Eddie Howe). There is no room for young English managerial talent to grow and we have a Catch-22 situation. Had Dyche or Howe been appointed everyone would be complaining about their lack of experience at a top level (myself included), and yet none of the top teams are ever going to put one of them in the hot seat. The only solution is a two-tiered system where the England manager appoints a young hot shot to act in the role of assistant with the ultimate goal being to replace the England manager. When they appointed Big Sam, they should have appointed someone like Eddie Howe or Gary Neville to work alongside him. I am sure had Hodgson’s players not let him down so dramatically we would have seen Gary Neville taking over the reins sometime in the future. By that time he would have been a part of the fabric. He would know the system and the players while at the same time impressing his authority and creating a team dynamic with the rest of the squad. And I can’t see a way out of this. The Premier League and the Football Association (FA) are worlds apart. And if we keep selling our Premier League clubs to the oligarchs like they are toy train sets we are never going to see young Englishmen in charge of our clubs. Now prove me wrong Big Sam. Help me find my sense of nationalism. Give me a reason to hang the union jack outside my house so the Welsh can throw bricks through my window.

The Secret Coach: Watching what you say
Paul Seaton
11 November 2020
.