Home / Business / Time to Exit UK Gaming Stocks, But Not Because of Brexit Vote 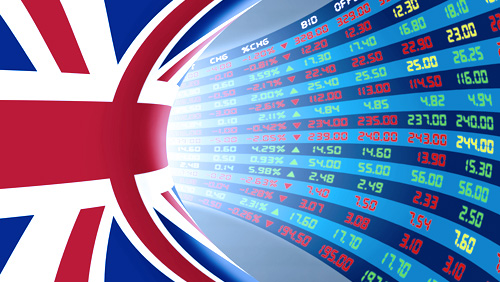 There are three things gaming investors should keep in mind about Brexit before making any investment decisions. First, the likelihood of Brexit is very small. Betfair puts the odds at 78% remain. The chances are very small because the European Union already has many terminal stress fractures that will eventually doom it, and letting any one of these develop into a bona fide breakage will put an end to the political union fairly quickly. The powers that be will do everything possible to keep it together until the money runs out, and they won’t let a silly thing like a referendum get in their way.

No, there probably won’t be any systemic voter fraud, but Even if Britons voted to leave, Parliament would still have to approve the Brexit. Likely some crisis would suddenly pop up demanding “national unity among Europeans” and the UK’s exit, even if it passes on Thursday, would be indefinitely postponed for “national security” reasons. War, another debt crisis flare up, or if heaven forbid some copycat shoots up a nightclub in England, Brexit would be halted. The terrible murder of Jo Cox over the weekend almost did derail the entire vote as it is. The point is, the referendum is a farce, just like last year’s Greek referendum to accept or reject the Eurozone bailout package was a farce. The Greeks rejected the bailout and it was forced down their throats anyway.

Second, whether the United Kingdom votes to stay or leave, stocks will continue doing what they were doing before the vote. Third, no matter what the vote ends up being, gaming regulations will only be tightened, because that’s what governments generally do anyway. So if you’re hoping Brexit will lighten regulatory burdens on bookies, forget it.

Licensing specialist David Clifton said as much during a panel session at the conference of the International Association of Gaming Advisors in Malta this month:

“In short, in my view at least, Brexit will not result in an exit from continuing robust regulation of UK gambling operators. Indeed, as some across the English Channel might express it, ‘plus ça change, plus c’est la même chose’.”

Interestingly though, he did say something else quite revealing:

In Europe, mutual recognition of gambling licences issued in EU Member States is now a long-lost dream. Co-operation rather than harmonisation seems to be the way forward and that does not demand membership of the EU club, as Alderney and the Isle of Man have effectively proved.

In other words, the European Union has not helped streamline gaming regulation one bit, and if that’s true, breaking up the EU probably won’t muck it up any worse.

Far more interesting than Brexit though is something else that happened in the UK back in March. Take a look at this doosey:

This is the M2 money supply reported by the Bank of England. There was an enormous drop from February to March that is unprecedented. To see how unprecedented, let’s zoom out:

You’ll notice a small bump down in 2008, and the one that just happened is much sharper. If this were any other country but the UK, it would be a green light to going short. Unfortunately, the Bank of England reports another number called M3 that includes long term time deposits as well. M2 only counts short term time deposits. The M3 situation is not as bad.

So we see that the UK money supply plus long term time deposits has not changed much for the past 6 years. Neither has the FTSE 100: 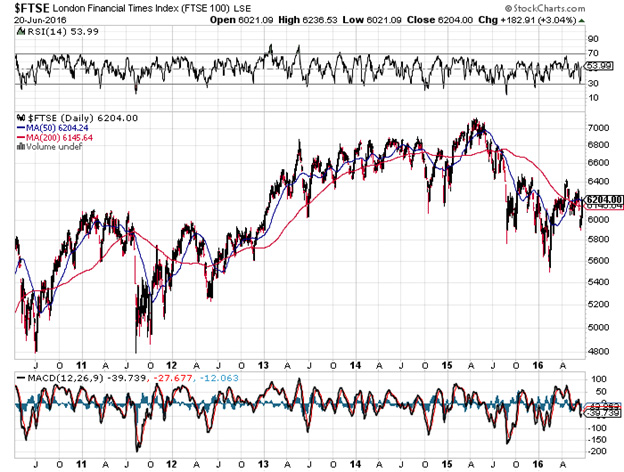 The charts suggest though that British stocks are more sensitive to M2 than M3 in the UK, because M3 did not decline noticeably in 2008 while M2 certainly did. What happens next with UK stocks depends on how much access and how quickly capital markets can access long term time deposits, because for some reason all the money lost in M2 is going there, as the missing money is showing up in M3. This is a bit of an arcane question that depends on obscure banking laws and it’s not worth the risk of staking money on long or short, so if you own any UK gaming stocks, or any UK stocks at all besides committed very long term holds of companies that are actually growing, then hold until Friday morning and liquidate positions on a “Remain” rally. The selling doesn’t have to all be done in one day, but by the end of the month it is a good idea to significantly lower your UK stock portfolio. The “Remain” relief rally is not likely to last very long given the monetary situation.

It may also be a good idea to sell some UK stocks now because a Brexit vote, even if it doesn’t mean much practically, could inspire ill will among European politicians who may want to exact punitive measures on UK companies, especially ones you score political points for criticizing like gambling companies. Urband legend has it that Joseph Stalin once said that it’s not the people who vote that count, but who counts the votes. While the UK is not really into voter fraud on such scales as the Soviet Union, the same idea still applies to rules and regulations. It’s not the regulations that matter, but who enforces them. If Britain votes to leave, get ready for some strict enforcement of regulatory laws, especially against companies that it is politically correct and stylish to disdain.