Home / Business / What Happens to Gambling Companies if the UK Leaves the EU? 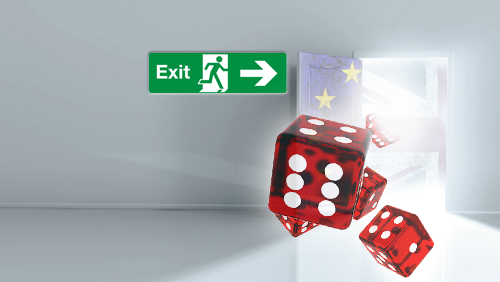 In June, the United Kingdom will vote on leaving the European Union, the so-called Brexit. The “In” camp has a 10 point lead as of now over the “out” camp, but that could change in the next three and a half months. The vote may be a close one, though if Scotland’s recent rejection of independence from the UK is any indication, the prevailing mood seems to be one of not rocking the boat too much.

But what would be best for business in general, and for the UK gambling industry in particular? The answer is probably that staying would be better. Here’s why. The EU both harms and helps businesses in different ways. The most positive aspect of the EU’s existence is that it makes trade easier by keeping the politicians of each EU country from building very high protectionists tariffs around their respective countries. Protectionist barriers still exist, particularly against UK books, but the EU makes them less of a serious problem. That’s a good thing, but that doesn’t mean that the existence of the EU is absolutely necessary for keeping free trade flowing.

Trade barriers lead to wars, which is the absolute worst thing for every business except the business of destruction. But if the UK votes to leave the EU in its June referendum, there is still no inherent reason for the UK to suddenly raise a bunch of tariffs against its European neighbors. Leaving the EU only raises the possibility that trade barriers will start being erected because UK politicians will no longer be paid by taxpayers to prattle and vent to each other in Brussels. Think of the EU as a giant blackmailing scheme by European politicians against taxpayers, where UK taxpayers specifically are forced to pay £50M a day in membership fees (according to George Galloway) to smug “Great Men” who throw themselves lavish dinner parties in taxpayer funded steel and glass skyscrapers. As long as they’re all being paid off, as long as they get their membership fees, they promise not to erect trade barriers – there’s your blackmail.

Now, the blackmail price may indeed be worth it if it stops trade barriers from being erected. But if theoretically the UK pledges to keep the same level of free trade while out of the EU as they did in it, then UK businesses would be much better off not paying the blackmail fees and just continue trading. It would make everyone in the UK £50M a day richer collectively. Should we expect trade between the UK and the rest of Europe to remain as free as it is now if the UK leaves the EU? Probably not, because it would require sincere nobility of the UK political class, of which there is very little to none.

Say the UK leaves the EU and the other EU countries are insulted that the UK is no longer putting their £50M a day into the EU loot pie. So they pass a tariff or something against the UK. This is very possible, if not likely. UK politicians would then have show some real self-control and be very noble in saying, “We understand you’re upset but we won’t retaliate because we believe in free trade.” And they’d have to maintain this position until other EU countries let up. This is a real stretch. Politicians are not anywhere near that noble.

And free trade is important to UK bookies, some more than others. Ladbrokes for instance gets 10.5% of its revenues from Europe. For William Hill it is only 3%, centered on Spain and Italy. Paddy Power is mostly UK and Australia with a little bit of business in Italy and France. Rank Group gets 5% of its revenues from Spain and Belgium. So we’re not talking huge numbers here, at least not directly, but it is still significant. Leaving the EU could jeopardize those revenues somewhat.

Then again, the EU does prevent UK companies from entering European markets as well. In November 2003 for example, Ladbrokes was forced to shutter its German sites following a judgment in favor of a State-sponsored gaming racket in Westphalia. This also happened to William Hill. Perhaps leaving the EU will give these companies more of a reason and ability to reenter these markets in a brazen “screw you” maneuver. But that would obviously anger Germany and instigate a trade war, so probably not. The point is, it isn’t perfectly clear either way, but it leans towards staying.

From a free trade perspective then, it certainly looks advantageous for the UK to stay. But what about from a taxation and regulation perspective? That side of things looks even more blurry. On the one hand you have people like Nigel Farage who is adamant about leaving the EU and definitely on the free market side of the equation. Farage is a friend of the gambling industry and isn’t one to pass laws to specifically harass businesses. In fact, in 2014 he teamed up with Paddy Power in a promotion for the Ryder Cup. On that basis one could take an educated guess that leaving the EU would be good for the gambling industry because it will embolden UKIP and people like Farage to expand free market policies.

But on the other hand you have people like George Galloway who is also strongly in favor of leaving the EU, but for the exact opposite reasons. He wants the freedom to manipulate and bleed the UK economy more by jacking up welfare, regulation, nationalization of major industries and other things that are the death knell of all human economic activity. If EU membership is the strongest force stopping politicians like Galloway from getting their way on economic policy, then leaving the EU would be a disaster. While both Galloway and Farage talk about democratic principles as their reasons for wanting to leave the EU, there is nothing inherently good about democracy. Democracy is a bad thing when it leads to nationalization of major industry and the emboldening of moralizing holier-than-though politicians who call gambling a “vice more damaging than heroin”.

From a monetary perspective, the UK leaving the EU will probably force a deeper monetary union within the Eurozone to prevent it from disintegrating. If one country can leave the EU, so can others, so controls will probably be tightened to try to prevent this by the politicians who would rather not lose any more contributions to fund their lavish dinner parties in Brussels.

In the end, just like the vote will probably end up with the UK staying, it would probably be better for the UK bookies if they stayed in the European Union, but that isn’t certain. Though the EU is basically an extortion ring, it is better than Europe exacting punitive economic measures against the UK for leaving. If the UK does vote to leave though, expect UK stocks to drop temporarily.