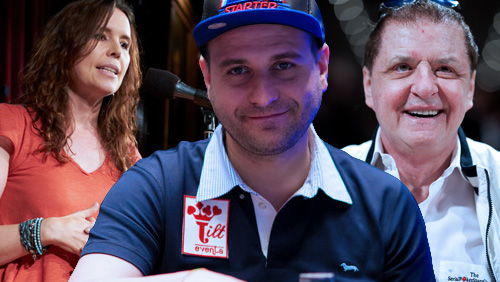 3-Barrels of pure value including an appearance on The Moth by Annie Duke, Roberto Romanello makes an immediate impact as an ambassador of partypoker, and Pierre Neuville eyes a spot in the higher echelons of The Global Poker Index.

We don’t often see Annie Duke at the poker tables. Unlike her brother Howard Lederer, and his former Full Tilt Director, Chris Ferguson, one doubts that will change anytime soon.

Duke has taken everything she has learned at the poker tables and turned it into a sweet gig as a public speaker and business consultant. Earlier this week she appeared on The Moth Podcast, a unique live storytelling experience, where she talked live and unaided on the theme of The Big Things You Don’t Do.

The crux of her talk centred around the 2004 Tournament of Champions; an event Duke won for $2m and in particular, a hand she played early in that game when she laid down pocket tens against an all-in from Greg Raymer.

“15 seconds in poker is an eternity,” said Duke as she explained the length of time she was taking to make the decision because she was scared people would see her make a mistake.

Duke called the hand the ‘most important’ of her life because the lay down gave her the belief that she deserved to be playing poker against such legends despite ESPN only including her in the field because they had decided ‘women were a novelty at the time.’

The talk is authentic, vulnerable, and inspirational. It is a rare insight into the mind of a poker player clearly struggling with a form of ‘imposter syndrome’.

You can listen to the 15-minute talk right here.

Whoever hands out partypoker patches has a keen eye.

Earlier this week, the online poker room agreed on terms with Roberto Romanello to represent them at the 47th Annual World Series of Poker (WSOP), and the Welshman repaid his faith in them by exposing the patch on a run that nearly ended with a berth in the Triple Crown club.

Only Romanello, Mohsin Charania, Andrey Pateychuk, Moritz Kranich, and Harrison Gimbel are capable of joining the Triple Crown with a WSOP bracelet win, and the smart money has been on Charania after cashing six times and finishing 10th in Event #4: $1,000 No-Limit Hold’em Top Up Turbo Event.

Then partypoker slapped a patch on the restaurant chain owner from Gorseinon, and he was all business, wading through 2,240 entrants before his dream of winning his first WSOP bracelet was cut short by Erik Silberman and Chase Bianchi.

Although the gold eluded him, Romanello picked up $142,926 for his third place finish, and it ranks as his largest WSOP score to date. As part of the deal, Romanello will also be blogging about his Vegas exploits as well as helping to promote the site’s Caribbean Poker Party in November.

Pierre Neuville Wants to Put His Money Where His Mouth is

We all know that the Belgian Pierre Neuville is not short of money, but he doesn’t do too badly in the confidence department either. The 2015 November Niner, and recent runner-up in Event #10: $1,500 No-Limit Hold’em event where he earned $213,836, recently told PokerNews that he has set a goal of breaking into the Global Poker Index (GPI) Top 50 and is willing to put his money where his mouth is.

Neuville, 73, wants to break into the GPI Top 50 by the end of June 2017 and is willing to bet $50,000 on the outcome. The Belgian has already opened a bank account to handle the money that comes in from the bet and has started to look for interested punters.

Neuville is the second highest ranked Belgian on the GPI, behind Davidi Kitai, but has a lot of work to do if he is going to double his $50,000 stake as he is currently ranked #94 in the world.

Antonio Esfandiari is the inspiration behind the bet. Neuville wanted to know what all the fuss was about after reading about the Magician’s prop bet antics, and so he made a €500 wager with a friend that he would break into the Top 50 of the GPI.

If you are interested in taking Neuville up on his offer, he is willing to take €10,000 on a single bet. You can contact him on Twitter @pierre_neuville.