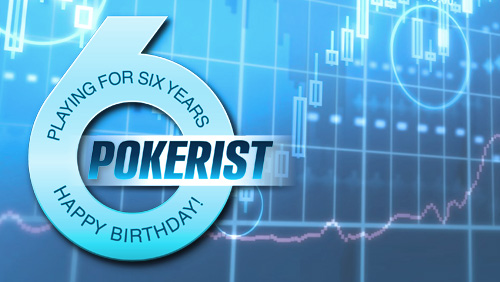 Dublin, Ireland – May, 27 th 2016 – KamaGames®, a global developer and publisher of social games for mobile platforms & PlayStation Network, today announced details of its player research and promotions to mark the 6 th anniversary of the launch of its flagship title Pokerist® Texas Poker.

Pokerist Texas Poker was KamaGames’ first social casino title released worldwide launching first on Facebook and then on iOS and Android on 28 th May 2010. Since then, the game has been released on the Yahoo store, Windows Phone Store, Amazon Apps Store and Apple TV with over 81 million players around the world sitting down at the tables which has made it the #1 Top Grossing App on the Apple Apps store in 89 countries as well as being in the Top 5 Google Play Grossing Apps in 24 countries.

KamaGames Ireland’s Managing Director, Andrey Kuznetsov, said “We are incredibly proud of Pokerist’s huge success over the years and wanted to say a big thank you to all of our players and supporters that have made the game what it is. Through our own extensive insights into our global player ecosystem, it’s been fantastic to see that Pokerist is more than just a social casino game, it is a place to meet with friends and make new connections with likeminded players of casual games”.

“Pokerist’s incredible reach and long lasting legacy, provides KamaGames with a unique view into the social casino ecosystem. As part of the game’s 6 th anniversary, we wanted to really focus on the mind-set and understand the psychology of the player. We have found that a vast number of our players use the game to not just play poker but also – and in some regions mostly – to interact with other players. We were absolutely amazed to see that over the past 6 years over 4 billion player-to-player chat messages were sent at the table, 1.3 billion private messages were sent between players, over 200 million new connections were made and a staggering 500 billion gifts were sent between our players”.

As well as these interesting player insights, KamaGames also released details of it’s in-game research findings from the past 6 years that showed over 2.8 trillion hands of poker have been played since 2010 with more than 70,000 trillion chips being won, the biggest win by a single player of all time being 50 billion.

“We are incredibly lucky to have such an in-depth game insight solution here at KamaGames which not only allows us to focus on our areas of growth but also gives us some eye-opening and fun facts too” Kuznetsov added. “For example, it was interesting to see that Norway was the home of some of our most hard core players in terms of time spent, however, it was Hong Kong and Singapore that have the more advanced players in the game. When it comes to socialising through the game, our research found that players from Russia were the most flirting (yet Romania was the runner-up when we factored in market size), but the country that sends the most virtual kisses was actually the USA! When we looked at the trends, it became clear that the social aspect of the game has increased over the years (double digits), with the game taking a more prominent place in player’s interactions with their Pokerist friends. All of this helps us to further improve the many different layers of the game, as well as developing a greater understanding of the region itself”.

To further celebrate the game’s 6 th anniversary, Pokerist Texas Poker will be running a number of promotions and giveaways over the next 2 weeks which will include tournaments, special items, chip giveaways, sales as well as collaborations with key social influencers and youtubers, more details of which will be announced via KamaGames’ social media channels over the promotional period.

KamaGames is a global developer and publisher of social games for mobile platforms, PlayStation Network as well as other console and online gaming platforms.

Established in 2010 and headquartered in Dublin, Ireland, the company employs over 220 staff globally and has operations and marketing/business development offices across the global markets including UK, USA, UAE, and Russia.

Utilizing its own proprietary cutting edge technology platform, KamaGames continues to develop and publish a range of exciting and fun games for all ages that are localized into 28 different languages and reach over 81 million gamers worldwide with over 1 million daily active users.

The company’s flagship game, Pokerist® Texas Poker, was named one of the Best Apps of 2012 by Apple, was the #1 Top Grossing App on the Apple Apps store in 89 countries as well as being in the Top 5 Google Play Grossing Apps in 24 countries. The game still continues to grow through its expansion onto the Amazon Store and through Windows Mobile.