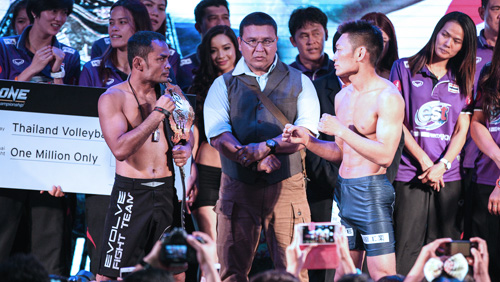 One: Kingdom of Champions Face-off and Photos

25 May 2016 – Bangkok, Thailand: The largest sports media property in Asian history, ONE Championship™ (ONE), announced today that the mixed martial artists competing at ONE: KINGDOM OF CHAMPIONS are ready for all the action which takes place tomorrow

evening, 27 May, at the Impact Arena in Bangkok, Thailand. Competitors faced off against one another ahead of fight night, which promises to be an amazing spectacle of world-class MMA action. Undefeated ONE Strawweight World Champion Dejdamrong Sor Amnuaysirichoke is set to defend his title against unbeaten Japanese challenger Yoshitaka Naito in a 5-round title tiff.

Visit the official ONE: KINGDOM OF CHAMPIONS Face-Off Photo Gallery by clicking:  https://goo.gl/M4tHkn

Dejdamrong Sor Amnuaysirichoke, ONE Strawweight World Champion, stated: “It has always been my dream to compete at home in front of all of my family and friends, in front of the people of Thailand. I am grateful to ONE Championship for giving me the opportunity to live my dream and honoring me as champion. This fight means so much to me and I promise to give my all inside the cage.”

Yoshitaka Naito stated: “I am coming into this fight as the challenger, as the underdog, in front of my opponent’s hometown crowd. But in my professional career, I have not known defeat and I plan to keep it that way on fight night. The champion had better be prepared for a real battle, because I will be bringing all my skills into the cage. I will walk away with that belt around my waist.”

Tickets for ONE: KINGDOM OF CHAMPIONS are still available at https://www.thaiticketmajor.com/

ONE: KINGDOM OF CHAMPIONS

ONE Championship is the largest sports media property in Asian history. Headquartered in Singapore, the world’s most exciting mixed martial arts organization hosts the largest sports entertainment events across Asia featuring the best Asian mixed martial artists and world champions, all signed to exclusive contracts, on the largest media broadcast in Asia. ONE Championship is broadcast to over 1 billion viewers across 75+ countries around the world with some of the largest global broadcasters, including FOX Sports, Setanta, MNC, Astro, Thairath TV, ABS-CBN, TV5, Physique TV, MYTV, HTV, Esporte Interativo and more.