Home / Sports / So You Want To Bet The 2016 Preakness Stakes 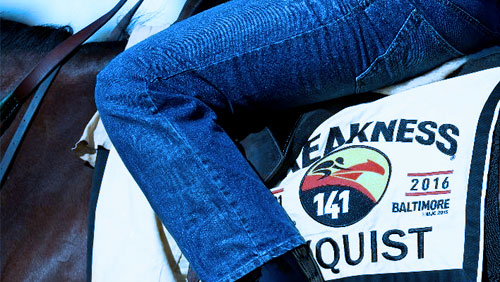 Betting the Preakness Stakes is always a tug-of-war between your heart and your brain. Part of you always wants to root for a Triple Crown hopeful, but the other part of you inexplicably chases the long money on an upset. So should you lean towards your heart or your head this year?

The 2016 Preakness Stakes is set to run out of Pimlico Race Course on Saturday, May 21st with a start time of 6:45pm EST.

The field is led by Nyquist, who gutted the 2016 Kentucky Derby in a decisive fashion. He didn’t run the best line (Gun Runner did), and he didn’t have the most advantageous post position (Exaggerator did), but nobody showed the blinding speed and ruthless competitiveness that Nyquist did on derby day. He posted the 14th fastest time in Kentucky Derby history.

And people said he wasn’t special.

NYQUIST (3/5 to win the Preakness Stakes)

It’s safe to say that the 2016 Preakness Stakes is a top-heavy field. Nyquist enters as a 3/5 favorite, carrying odds that are spot on to California Chrome in 2014. By post time on Saturday evening, I’d expect Nyquist to be holding 4/5 odds.

The winner of the Kentucky Derby has won three of the last five Preakness Stakes races. American Pharoah, California Chrome and I’ll Have Another were the three. Animal Kingdom fell to second behind Shackelford in 2011, while Orb lost to Oxbow in 2013. Don’t feel weird if you haven’t heard of those four horses.

It’s also worth mentioning that the Kentucky Derby went chalk, with the top four horses on the betting board finishing in that exact order. Either handicappers and oddsmakers are getting better at this, or it was a chance occurrence. No matter how you look at it, you have to give the oddsmakers some credit here and lean in on Nyquist just like they’re doing.

What happens underneath Nyquist is the real question. Right now he is the horse you should be betting on to win without question. There are, however, two other Preakness Stakes contenders in the mix.

EXAGGERATOR (3/1 to win the Preakness Stakes)

Exaggerator has finished behind Nyquist in two races this year. He lost the Kentucky Derby despite a dazzling stretch run at the end and was also dusted at the San Vicente Stakes in February. Still, there are many that feel encouraged by his immense speed.

This isn’t to suggest that Exaggerator can’t win the Preakness Stakes, but it does crack the door open for a lot of other spoilers. And there’s no bigger mystery in the upcoming race than…

STRADAVARI (8/1 to win the Preakness Stakes)

This horse has literally come out of nowhere to become a threat in the second leg of the Triple Crown. He is a Todd Pletcher product, which I wouldn’t get too excited about because the legendary trainer hasn’t actually ever won the Preakness Stakes. But he’s also a son of legendary stud Medaglia d’Oro.

He’s only competed in allowance and maiden races (the equivalent of exhibition games in horse racing), but his times from those outings suggest some tantalizing speed.

Stradivari crushed an April allowance at Keeneland in a time of 1:48.00 over 1 1/8th mile. Nyquist has only competed at that distance once, when he ran the Florida Derby, and posted a time of 1:49.11 though he eased up down the stretch after he was free and clear.

The truth is that there’s no telling what Stradivari is capable of in an actual competition against the best horses in the three-year old age grade. But he has blinding speed, and sometimes rookies can get extremely lucky.

He could share a similar fate to Danzing Candy, who stole the San Felipe Stakes in March after posting similar times to Stradivari. Who did Danzing Candy beat in that race? Exaggerator.

Stradivari is a worthy standalone bet to place or show, but I wouldn’t count on him upending Nyquist. He’d probably be the most fun bet to make, especially because of the “I told ya so” factor.

COLLECTED (10/1 to win the Preakness Stakes)

Winner of his past two races, Collected opted to skip the Kentucky Derby because his handlers didn’t think he was up to snuff. And the story on Collected resonates that sentiment. He’s simply a good runner who shies in the face of adversity. He is coming off a long rest, but the reason that his odds are so favorable here are simple: the field in this race isn’t very good.

You can tell by scanning the longshots, of which there are 7 in a field of 11 horses. If something whacky happens, it’s going to be from an outside shot like Abiding Star or Fellowship. It likely won’t be Collected. I would steer clear of him.

ARE THERE ANY LONGHSOTS ACTUALLY WORTH TAKING?

The short answer is “nope”, but we might as well discuss reasons why without writing these guys off right away.

Fellowship opted to run the Pat Day Mile on the Kentucky Derby undercard instead of in the big race. He placed fourth in that race. Excuse me for not getting too pumped up about him.

The Japanese-trained Lani finished 9th after engaging in a lot of fan fare leading in to the Kentucky Derby itself. He’s only won a single stakes race in his life, and he crushed a terribly weak field to do so.

Interestingly, a trio of Uncle Mo sons will run alongside Nyquist who is also out of the same bloodstock. Uncle Lino, Laoban and Abiding Star are all carrying heavy odds as you can see below. None of them are worth banking on although Abiding Star is gaining some traction as a horse of mystery. He hasn’t competed in a stakes race, but hasn’t posted great exhibition runs either.

Cherry Wine finished third at the less heralded Blue Grass Stakes, while the aforementioned Uncle Lino came in fourth during that same race.

I would also avoid Awesome Speed despite his great name because he simply isn’t very fast. He won the Federico Tesio in April, a race run over 1 1/8th miles with a snail’s time of 1:53.21, nearly five second slower that the time it took Nyquist to cover that same distance.

THE BEST BETS FOR THE 2016 PREAKNESS STAKES

These bets basically explain themselves, but the last option is probably the third one because it’s the safest. You’re basically saying that any of the selected horses will finish in the top-2, which basically gives you three winning combinations (Nyquist + Exaggerator, Exaggerator + Stradivari or Nyquist + Stradivari).

If you’re in to a heavy money wager, then Nyquist is the easy option. I’m not 100% convinced that Exaggerator isn’t worn out from a busy schedule that’s already included four races that’s only produced a single win.

And as always, the horse man in me is rooting for another Triple Crown contender because that’s when this sport is at its absolute best. So run onward in to history, Nyquist. The world will be watching (and betting insane amounts of cash on you too).