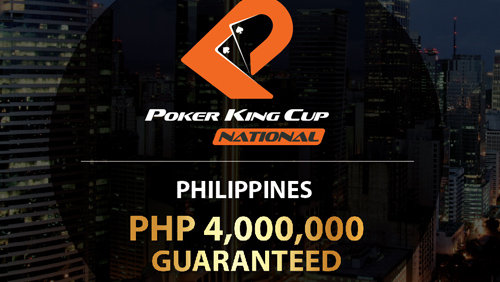 May 16, 2016 (Manila, PH) – Riding on the event’s successful launch during WPT National Philippines in January, which amassed a total of 312 entries on a 50,000 USD guarantee, and the recent follow-up at the WPT National Korea in May, which improved upon the original with a lot more goodies, and saw Mainland Chinese player, Fan Fan, bag the top prize at 17,136,000 KRW, the newly-minted special Poker King Cup trophy, a full set of PKC limited-edition merchandise, and tickets to the upcoming event, Poker King Club is now poised to launch the first-ever Poker King Cup National, a standalone event to be held in Asia’s prime poker destination, Manila, this June. The event will have one Main Event flanked by three side events over a five-day period.

The tournament will be held at the Solaire VIP Level 2 in Solaire Resort and Casino, Manila from June 9 – 13, 2016, and will feature all the hallmarks of a Poker King Club event that the brand has become known for. These include a number of well-structured events, created specifically for the client base, a number of amazing, tailor-made prizes and trophies made for the event, and a whopping 4,000,000 PHP guarantee.

During his recent interview with DZPK, here is what Poker King Club President, Winfred Yu, had to say regarding this milestone in PKC’s venture into live-tournaments:

“The overwhelming response we got from the players who joined our first event in Manila gave us a very optimistic outlook regarding our event and the further development of poker in Manila. This is why it was an obvious choice to have our first standalone event in Manila. We are optimistic that it will gain popularity and followers that would want to follow it, so it’s not just another event.”

Some players who already have their tickets for the tournament include the four lucky winners who received the Poker King Club National ME tickets as part of their prize, including:

1st Runner up of WPT National Korea ME – Sun Xijie

2nd Runner up of WPT National Korea ME – Duan Qifeng