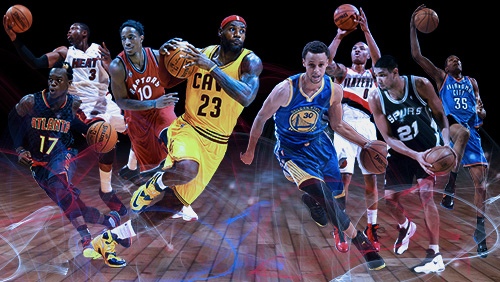 The road to the Larry O’Brien Trophy continues as the 2016 NBA Playoffs reached the end of its first round. So after a set of blowouts and ugly basketball, it’s now time to preview and predict which team will advance to the conference finals?

Let’s start with the obvious here. The Warriors are generally expected to advance the Western conference finals as they achieved the best regular season record in NBA history going 73-9, and the next goal is to follow up that regular-season success with a second straight NBA title.

Now that we have the Trail Blazers, do they actually have chance to beat the Warriors in the series? I thought, well, uhm… maybe Damian Lillard gets to play in his hometown in Oakland, and Portland beat them once during the regular season, and the fact that Stephen Curry is injured and has been ruled out for Game 2. Okay, Trail Blazers might have a chance.

But if we look at what the Dubs have, they still have Klay Thompson who led Game 1 with 37 points, and the beast Draymond Green who made a triple double. Even without Curry, the Warriors are still a contender. They still blew out Houston Rockets without Curry. But he has to be back because Golden State is not a championship team without Curry, there is no way they can win a championship without a healthy Steph Curry.

Prediction: As much as I like the Trailblazers and Lillard, they’re not gonna win the series but to give them enough credit, they can win at least one if not two games in this series. And even if Curry does not play at all in this series, the Warriors will win in six games or fewer.

The Spurs begin their second-round matchup against familiar foe the Oklahoma City. After the Spurs won Game 1 at 124-92, many fans and bettors rooting for this team, including me (excuse the favoritism), assumed that San Antonio would go to Oklahoma City up 2-0.

But the Thunder beat the Spurs after Patty Mills missed an open-three pointer that could have gave the Spurs another win, plus Russell Westbrook and Kevin Durant’s combined 57 points in a 98-97 win in Game 2.

History hints at another 6 game series between these two clubs, as this is the 2nd time in the last 5 seasons that these two franchises have met in the playoffs. In the 2011-2012 season, the Thunder beat the Spurs 4-2 in the Western Conference Finals but in 2014, the Spurs returned the favor, defeating the Thunder 4-2 before eventually beating the Miami Heat in the NBA Finals.

Fast forward to this season, San Antonio has proven to be better than Oklahoma City over 82 games in the regular season. They have arguably the best coach in the NBA and their roster consists of a bunch of smart players who know their roles and fulfill them admirably. The Oklahoma City, on the other hand, has two of the top five players in the NBA—Westbrook and Durant—and have athleticism and youth on their side.

Prediction: Overall, Spurs against the Thunders is gonna be one of the most exciting match-ups in this series and it has 7 games written all over it, with San Antonio heading to conference finals.

The Raptors have broken their first-round playoff jinx, but do they have anything left for Miami? For the first time since 2002, the Toronto Raptors have won an NBA Playoff series against Indiana Pacers in seven games. This year could be the year they go on to the conference finals, but the chances don’t look good. Toronto relies heavily on Kyle Lowry and DeMar DeRozan to shoulder most of the scoring, which means when they struggle, the team struggles. Unlike the Heat, Dwayne Wade, Luol Deng, Hassan Whiteside, Joe Johnson, and Goran Dragic are all very capable of scoring the ball.

So for the Raptors to have a chance against the Heat, they should get a boost from their home crowd again and need to jump on this Heat team early in the series. Supporting casts Dwayne Casey, giving Jonas Valanciunas, Norman Powell, Corey Joseph and Bismack Biyombo should get involved in taking the squad to the next level push.

Prediction: The Raptors may have the ability to stretch the series out to game six, but Wade and company would take them out and head towards the Eastern conference finals.

In the East, everyone assumes the Cavaliers are going to make it to the finals, as Lebron James is still the most deadly single force in the NBA plus he’s getting a lot of help from Kevin Love and Kyrie Irving unlike last year’s Eastern conference finals against the Atlanta Hawks.

And if the regular season was any indication, Cleveland came away victorious in all of the three regular-season games between the Cavs and the Hawks. And if Game 1 is another indication, James scored 25 points, Kyrie Irving added 21, and Cleveland withstood a strong second-half surge by Atlanta with a 104-93 victory.

Prediction: Hawk’s stifling defense can keep the team in the series but there is no way they can win this series so I’ll say Cavs to head in the conference finals after five.