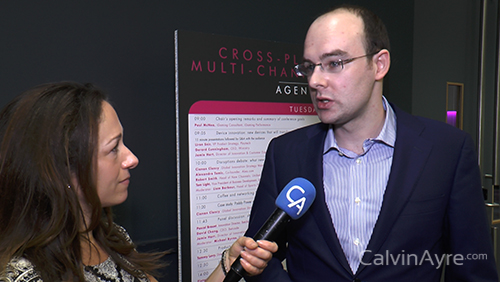 In this interview with CalvinAyre.com’s Rebecca Liggero, Cianan Clancy discusses what Paddy Power has done to look into the potential of wagering on the Apple Watch.

Is it possible to integrate online gambling on the Apple Watch?

According to Cianan Clancy, yes. In fact, Paddy Power has already been looking at “interesting” ways to have casual punters play using their Apple devices.

“From a sportsbook perspective, you can do simple things like creating a bet, cashing out a bet. The interesting things is around games, so roulette was probably one that was quite interesting. It worked quite well with our customers,” Clancy told CalvinAyre.com.

With roulette, Clancy admitted they have gone over the top and “overcomplicated” the game at first, but once they’ve simplified it basically a game of red or black, roulette not only “looked really, really well on the Apple Watch,” it also “scored quite nicely” from the customer interaction perspective.

“From the Paddy Power perspective, we’re all about the casual punters so you know, if you’re waiting for a taxi, you’re waiting in the airport, the ability to have a quick game of roulette—black or red—it’s fantastic,” Clancy said.

Paddy Power is arguably one of the leaders of innovation and entertainment in the online gambling industry. Clancy, who manages the company’s Global Innovation Strategy department, believes that what makes Paddy Power stand out is that they like putting ideas into action as quickly as possible.

“For us, it’s not really about the ideas. There’s so many ideas, particularly in Paddy Power—an organization that’s just full of ideas. The key thing is execution,” he noted.

At Paddy Power, Clancy said they are given 30 days not only to come up with ideas, but also to prototype them and put them in front of customers.

“That’s really what we do. Execution is absolutely key,” Clancy said. “[It’s] really getting them, you know, prototyping something up, getting it in front of the customers quickly, seeing what they think and then writing the business case from that.”