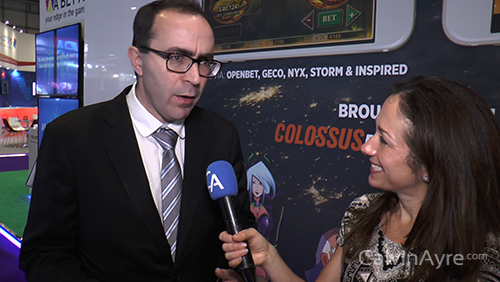 In this interview with CalvinAyre.com’s Rebecca Liggero, Colossus Bets founder Bernard Marantelli explains why they chose Africa as a prime area for their company’s growth.

The sportsbook solutions provider, which has already grown quite a bit geographically, has expanded its reach even farther with partnerships with Nigerian-based operators 1960Bet and NairaBET. Colossus Bets founder and CEO Bernard Marantelli believes Africa, thanks to its football crazy fans, is a prime area for the company.

Colossus Bets’ partnerships with NairaBET and 1960Bet will see a range of Colossus’s products rolled out, including its flagship Pick 7 Colossus, with the games localized for the Nigerian market.

“Africa’s a market where they are very aspirational in that they like small staking acts for large prizes, so it’s a perfect fit in many regards,” Marantelli said. “We just launched with NairaBET and 1960Bet, two of the biggest operators in Nigeria, and on the back of going live there, we’ve actually signed three African contracts and we’ve been blown away. They are about 30 percent of our transaction volume already and representing about 12-14 percent of our spend, so I think Africa will be a big growth market for us in 2016.”

Aside from Africa, Colossus Bets also has a presence in the Asian market. Just recently, Colossus Bets launched its Colossus Football Lottery in Asia in conjunction with online sports betting technology provider ONEworks. Marantelli said his company’s flagship partnership with ONEworks is “an important milestone” given the technology provider’s long list of Asian-facing licensees.

“It’s probably the largest platform in Asia. They probably have about 68 licensees rollout between the end of February and the start of the [European football championships]. We’ve built their website, I think, in eight languages and 10 currencies, so it’s really positioned well for launch in Asia. I think it will be a really good business arm for us, Southeast Asia and Australia,” Marantelli said.