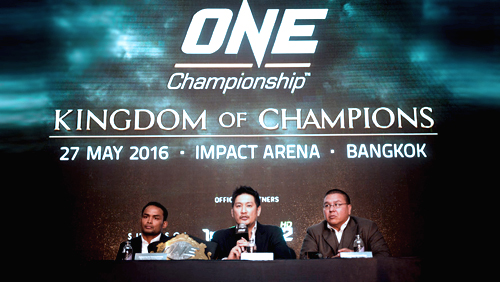 ONE: KINGDOM OF CHAMPIONS

07 April 2016 – Bangkok, Thailand: The largest sports media property in Asian history, ONE Championship™ (ONE) will hold its historic inaugural Thailand event in the ancient city of Bangkok. On 27 May, the Impact Arena will play host to ONE: KINGDOM OF CHAMPIONS, marking ONE Championship’s first foray into Thailand. The event features hometown hero ONE Strawweight World Champion Dejdamrong Sor Amnuaysirichoke in the card’s headline bout against undefeated Japanese champion Yoshitaka “Nobita” Naito.

Tickets for ONE: KINGDOM OF CHAMPIONS will be available from Friday, 8 April at https://www.thaiticketmajor.com/

President of ONE Championship Thailand, Kamol ‘Sukie’ Sukosol Clapp stated: “This is monumental progress for the sport of mixed martial arts in the world and in Thailand, and also one giant step forward for ONE Championship as we bring martial arts back home to the ancient city of Bangkok. There is nothing like the atmosphere of a live ONE Championship event, and we want to show fans exactly what is in store. With the country’s top rock bands electrifying the stadium, ONE: KINGDOM OF CHAMPIONS is poised for an incredible evening of adrenaline-pumping action.”

ONE Strawweight World Champion Dejdamrong Sor Amnuaysirichoke is a three-time Lumpinee stadium Muay Thai world champion and is also undefeated as a professional mixed martial artist. He is known as a technical fighter with quick hands and lightning feet, employing some of the most unique and creative striking combinations as a martial artist with over 25 years of competitive experience. He now defends his title against Japanese fighter Yoshitaka Naito in the headline bout at ONE: KINGDOM OF CHAMPIONS.

Yoshitaka “Nobita” Naito of Chiba, Japan, is an unbeaten mixed martial artist with a perfect 10-0 record. He has four wins by submission and one knockout under his belt. The 32-year-old, who made a name for himself at Japan’s world-famous Korakuen Hall competing as the Shooto featherweight champion, will be fighting outside of his native Japan for the first time, and it will be in a contest for the ONE Strawweight World Championship against Thai titlist Dejdamrong Sor Amnuaysirichoke.

Marat “Cobra” Gafurov of Russia is the reigning ONE Featherweight World Champion, and is undefeated with 13 wins. A former M-1 featherweight champion, Gafurov defeated the top-ranked fighters in his weight class with relative ease in his first four bouts with ONE Championship. Out of his 13 victories, 9 have come by submission, proving that Gafurov is an absolute force to be reckoned with on the ground. He will defend his belt against Kazunori Yokota.

38-year-old Kazunori Yokota of Chiba, Japan, is a mixed martial arts fixture with over 12 years of professional fight experience under his belt. The current Deep featherweight champion, Yokota is one of the toughest fighters in the division. He sports a stellar record of 25 wins and just five defeats, and will be making his ONE Championship debut in a title bout against reigning ONE Featherweight World Champion Marat Gafurov.

Russia’s Timofey Nastyukhin has notched a series of ferocious finishes since joining ONE Championship, including stoppage wins over top fighters Eduard Folayang and Yusuke Kawanago. Although he fell short of victory in his last bout against Herbert Burns, Nastyukhin now returns to action against one of the biggest names in Asian MMA when he takes on striking specialist Rob Lisita.

33-year-old “Ruthless” Rob Lisita of Campbelltown, Australia, is making his highly-anticipated return to the ONE Cage. Lisita last featured in a submission loss to reigning ONE Featherweight World Champion Marat “Cobra” Gafurov in 2014, and took some time off from competition shortly after. At 14-7, the ruthless striker Lisita is back, and promises an overall improved mixed martial arts game. He’ll do battle against Timofey Nastyukhin in what promises to be an instant classic.

29-year-old Leandro Ataides of Rio de Janeiro, Brazil, will return to the ONE Cage following a harrowing knockout loss to Aleksei Butorin in 2015. Ataides, 29, strung together eight straight victories before encountering his first setback, but still remains a force to be reckoned with at middleweight. With an enormous chip on his shoulder, Ataides looks to get back on track by defeating his next opponent, Marcin Prachnio.

Marcin Prachnio is a Polish mixed martial artist with an impressive 10-2 professional record. He’s won his last five bouts, four of which by devastating technical knockouts. The attacking machine was victorious in his first appearance inside the ONE Cage, ousting Alexandre Machado just last February, and is making a quick turnaround to face the returning Leandro Ataides.

Thailand’s Anatpong “Mak Mak” Bunrad is one of the fiercest competitors at flyweight. He has a standout 5-2 professional mixed martial arts record and has defeated top fighters the likes of Geje Eustaquio and Marc Marcellinus. Bunrad likes to pepper opponents with heavy-handed strikes and powerful kicks, utilizing his world-class Muay Thai to earn hard-fought victories. Bunrad’s next assignment is against Filipino contender Eugene Toquero.

Flyweight standout Eugene Toquero is a former celebrity mixed martial arts and fitness coach in his native Manila, Philippines. The Filipino stalwart has a knack for highlight-reel striking techniques and operates at a pace which opponents find hard to keep up with. In his last bout, Toquero narrowly missed out on a spectacular finish of former ONE Flyweight World Champion Adriano Moraes, losing by submission in a tough contest. Now he faces Thailand’s Anatpong Bunrad next.

41-year-old Muay Thai veteran Yodsanan “Little Tyson” Sityodtong of Thailand is making his return to professional mixed martial arts competition following a brief stint in ONE Championship back in 2012. With the opportunity to compete in Bangkok, Sityodtong just simply could not pass up the chance to perform in front of his hometown crowd. He’ll take on fellow striking specialist Chrech Kosal.

Cambodian bantamweight prospect Chrech Kosal has two wins and only one loss as a professional mixed martial artist. A Khun Khmer specialist, Kosal is fast, quick on his feet, and powerful with his strikes. Thailand and Cambodia are set to rekindle their rivalry when Kosal meets Muay Thai specialist Yodsanan Sityodtong.

10 Live ONE events will officially be broadcasted throughout this year, aired every Saturday night at 10:00pm on Thairath TV.

A household name familiar to all Thai news readers, Thairath is the most powerful daily newspaper in Thailand. With more than a million copies of consistent daily circulation since 1962, Thairath has established a strong foothold as a leader in Thai society for more than 60 years and counting. Dedicated, experienced, and skilled in delivering human-centric news and a variety of content relevant to the daily lives of Thais, Thairath reaches out to its massive reader base through both classic and cutting-edge channels. This includes print, websites, smartphone and tablet applications, SMS subscriptions, and social networks. Adding to its array of platforms, Thairath has also ventured into the broadcast business by officially joining the digital TV industry, creating and adding fresh perspectives to the Thai television industry through news and entertainment programs under the name “Thairath TV.” Since its launch in April 2014, Thairath TV has lifted the industry standard with innovative news presentation techniques including immersive graphics to help report compelling stories to the mass audience. Additionally, those cutting edge technologies are the main driving forces which put Thairath TV on top in live sport broadcasting. With these establishments and the eagerness to continue to grow, Thairath aims to eventually become a content provider on a global scale.

ONE: Union of Warriors Complete with 10 Bouts
Press Releases
7 March 2016
.