Terrence Chan Wins His Very Own Thrilla in Manila

Terrence Chan continues his Mixed Martial Arts winning ways after a first round submission win against the diminutive Joco Mabute in Manila.

De La Soul once sang that ‘three was the magic number.’

For now, that number is six for Terrence Chan.

Chan has reached six World Series of Poker (WSOP) final tables. Unfortunately, he hasn’t been able to force any of his opponents to submit so he could take home a sliver of gold. 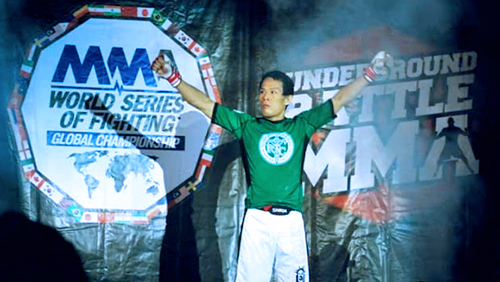 It’s a different story in his other love of Mixed Martial Arts (MMA). Chan recently beat Joco Mabute in his personal ‘Thrilla in Manilla’ taking his win/loss record to 6/0 (four as an amateur, two as a professional).

Chan weighed in at 125.6, but a local blog had him down at 129.6. Chan nearly pulled out of the fight because of this as he said in his own words ‘possibly the worst thing that you can do for your reputation as a prizefighter is miss the contracted weight.’ Fortunately, the mistake was rectified so Chan could get down to business.

Reading through Chan’s account of things the organisation of the event seemed a little bit of a mess. Chan was excited that Underground Battle (UGB) was appearing under the World Series of Fighting (WSOF) promotion. The NBC Sports Network occasionally broadcast WSOF events and it’s felt they are only a few rungs below the place that all MMA fighters want to end up: The Ultimate Fighting Championship (UFC).

It didn’t help the organisation run any smoother. Chan’s fight started two hours late presenting an unusual problem as he is usually fast asleep by this time. Fortunately, he managed to stave off the sleep fairies long enough to finish off his opponent in under two minutes thanks to a little mental game jiggery-pokery from poker mind coach Elliot Roe.

“Adrenaline is one hell of a drug.” Wrote Chan.

In truth, Chan dwarfed over his opponent, and he even felt a little sorry for him after attempting to ‘take his shoulder off’ thanks to a wrist control kimura grip that eventually forced his opponent to submit.

“To be honest, at the precise moment, it is a bit of a gross feeling bending someone’s shoulder behind their head in the direction that you know nature did not intend.” Wrote Chan.

The one thing I learned from reading about Chan’s exploits as he ‘came out ready to kill;’ talked about ‘destroying’ his opponent’s arm, and reminded readers that they are in there ready to ‘break limbs’ – is that the woman who allowed her dog to shit on a busy sidewalk and never stooped to clean it up has no idea how close to death she actually came.

Kicking myself for not having presence of mind to film/YouTube the woman who didn’t pick up after her dog shitting on busy sidewalk. 🙁