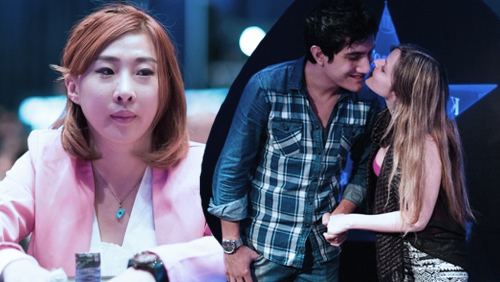 Kitty Kuo explains to Matt Savage why she prefers the European Poker Tour over the World Poker Tour, and you will be surprised to hear the beef; Ivan Luca defeats his girlfriend in heads-up action to win the Eureka Poker Tour Rozvadov Main Event.

The San Francisco Rush star was talking to the Executive Tour Director of the World Poker Tour (WPT), Matt Savage, during the WPT Bay 101 Shooting Star Main Event, when she decided to stick the spit through the pig.

After bluffing all of her chips to ‘people, I should not bluff’, Savage asked her why she didn’t like the WPT?

“I like the EPT more than the WPT,” said Kuo, “The men are more handsome.”

When Savage asked Kuo what was wrong with American men, she said they’re “too fat” and “when playing in a high buy-in tournament, you want to look at something good. A lot of men in America don’t care how they look.” Said Kuo.

“But you have a boyfriend don’t you?” Said Savage.

That would be the skinny American Russell Thomas.

According to the CDC, more than a third of U.S adults are obese (78.6 million), so I guess Kuo has a point.

753 players have entered this year’s WPT Bay 101 Shooting Star event making it the largest field in the stops history. Aussie Millions winner Ari Engel is leading the field of 280 players going into Day 2.

The highly talented Ivan Luca has won another title, but he will never win another one like this.

The Argentinean defeated his girlfriend, Maria Lampropoulos, in heads-up action. One assumes they don’t yet share bank accounts after the pair agreed to a heads-up deal that saw Lampropoulos take €95,404. Luca eventually overcame his other half to win the top prize of €106,186.

682 players entered the PokerStars.net Eureka Poker Tour Rozvadov €1,100 Main Event. The final played out on International Woman’s Day, so it was fitting to see Lampropoulos come so close to her first significant title. It was the second time she had finished runner-up in a €1,100 event in the past few weeks after finishing second to Sebastian Ta in the bwin.be WPT National Brussels Main Event for €68,200.

Luca’s victory moves him closer to the number one money spot in Argentinean poker rankings. His is now only $50,000 behind Jose Ignacio Barbero with $2,956,808.