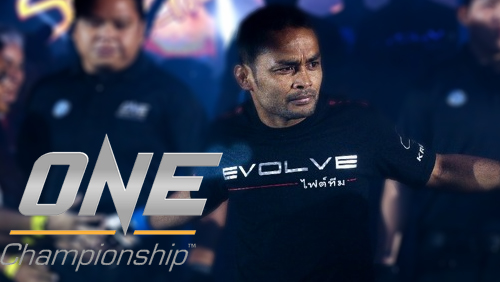 THE BIGGEST AND FIRST-EVER SPORTS ENTERTAINMENT SHOW IN THAILAND

03 March 2016 – Bangkok, Thailand: The largest sports media property in Asian history, ONE Championship™ (ONE), proudly announces its inaugural event in Thailand. Fight fans in Bangkok will be delighted to witness world-class mixed martial arts action live at the Impact Arena on 27 May

Led by new ONE Championship™ President of Thailand Kamol ‘Sukie’ Sukosol Clapp, ONE: KINGDOM OF CHAMPIONS is set to electrify an arena expected to be packed to the rafters. Headlining the fight card is former multiple-time Lumpinee champion and reigning ONE Strawweight World Champion Dejdamrong Sor Amnuaysirichoke. Famous Thai bands Bodyslam and Big Ass are also set to provide explosive musical entertainment to the audience.

For the first time ever, ONE Championship™ will hold its unique brand of live mixed martial arts action deep in the heart of Bangkok. The Kingdom has a history steeped in a rich martial arts background, being the birthplace of Muay Thai. Also known as “The Art of Eight Limbs”, Muay Thai utilizes the eight major contact points of the body in hand-to-hand combat. It is one of MMA’s most widely-used disciplines and its origins can be traced back to 16th century Thailand.

President of ONE Championship™ Thailand, Kamol ‘Sukie’ Sukosol Clapp stated: “The Kingdom of Thailand has an undeniably rich martial arts history, and I am personally excited to bring ONE Championship™, the world’s most exciting MMA promotion and Asia’s largest sports media property, to fans in the country who have been patiently waiting for years. One of our greatest champions, Dejdamrong Sor Amnuaysirichoke, cannot wait to return home and defend his belt in front of a hometown crowd.”

Thailand’s own Dejdamrong Sor Amnuaysirichoke is a former multiple-time Lumpinee stadium champion. He is also the reigning, defending, ONE Strawweight World Champion. He is the first Thai national in history to claim a world championship in MMA. Dejdamrong has built a solid career in ONE Championship™, producing highlight reel finish after finish. His dominance has also proven absolute, having successfully defended his belt against a tough opponent in his last bout. Undefeated after six professional fights, Dejdamrong is delighted to showcase his skills as he returns home to defend his title in front of friends and family in Bangkok.

ONE Strawweight World Champion, Dejdamrong Sor Amnuaysirichoke stated, “I have waited a long time for this. Coming home to Thailand and performing in front of my people has always been my greatest dream. Now, it’s become a reality. I vow to protect the title and bring the belt back home to Bangkok again as champion. It is an honor and a privilege to receive this opportunity.”

10 Live ONE events will officially be broadcasted throughout this year, aired every Saturday night beginning 12 March 2016 at 10:00pm on Thairath TV.

About Thairath TV
A household name familiar to all Thai news readers, Thairath is the most powerful daily newspaper in Thailand. With more than a million copies of consistent daily circulation since 1962, Thairath has established a strong foothold as a leader in Thai society for more than 60 years and counting. Dedicated, experienced, and skilled in delivering human-centric news and a variety of content relevant to the daily lives of Thais, Thairath reaches out to its massive reader base through both classic and cutting-edge channels. This includes print, websites, smartphone and tablet applications, SMS subscriptions, and social networks. Adding to its array of platforms, Thairath has also ventured into the broadcast business by officially joining the digital TV industry, creating and adding fresh perspectives to the Thai television industry through news and entertainment programs under the name “Thairath TV.” Since its launch in April 2014, Thairath TV has lifted the industry standard with innovative news presentation techniques including immersive graphics to help report compelling stories to the mass audience. Additionally, those cutting edge technologies are the main driving forces which put Thairath TV on top in live sport broadcasting. With these establishments and the eagerness to continue to grow, Thairath aims to eventually become a content provider on a global scale.