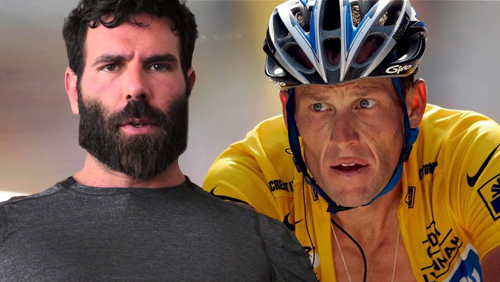 The Dan Bilzerian bike bet has gotten a little more interesting in the past few days after heavyweight biking champion of the world Lance Armstrong, and the most successful female poker player in history, Vanessa Selbst, both got involved via Twitter.

Dan Bilzerian’s Instagram account is laden with photos of blonde and brunette bikes, but this week a few of them have been shunted aside for a few metals ones.

What’s going on you may ask?

Last week, Bilzerian offered Samantha Abernathy $10,000 if she could ride a bike from Las Vegas to Los Angeles in 72hrs without dying. Bill Perkins picked up on that challenge and created one of his own when he challenged Bilzerian to do the same but in 48hrs.

Perkins offered Bilzerian a $600,000 even money bet. The rules state Bilzerian has to bike from his home in Los Angeles to the ‘Welcome to Las Vegas’ sign in Nevada. The distance is 278 miles. He has until May 31, 2016, to get the job done.

The bet has picked up a head of steam and Vanessa Selbst is keen to get some action according to a Twitter volley between her and Bilzerian. It started on Feb 17 when Ryan D’Angelo tweeted:

“Wasn’t he a navy seal or something? Seems like riding on a bike from Vegas to LA in two days is doable.”

“This is stupidly easy. I’ve basically done almost this as a very overweight out of shape person before, for no money.”

Funny how it goes from stupidly easy, to you wanting odds, typical internet specialist @VanessaSelbst @bp22

Justin Schwartz had to throw out a timely reminder that Selbst might not be the Internet wizard that Bilzerian supposes.

@DanBilzerian @VanessaSelbst @bp22 on a scale of @junglemandan to hellmuth vanessa is far closer to a live pro than an internet specialist — stealthmunk (@stealthmunk) February 21, 2016

We still don’t know if Bilzerian has agreed to take on the challenge. Apart from a few shots of his bike, and a tweet telling all and sundry that he has shaven his legs but won’t shave his balls, the jury is out.

The biggest hint we had that the man mountain is seriously considering taking Perkins on came after podcaster Joe Rogan sent Bilzerian a text message asking if he wanted the help of the heavyweight champion of anything to do with a bike: Lance Armstrong.

“Hey brother, Lance Armstrong says he wants to help you get ready for this bike wager you’ve got going on. Want me to give him your number?’

There was a fuck, a yes, and a lot of exclamation marks in the answer.

Realising the potential to push the exposure of the bet into the stratosphere, Perkins reacted by offering Armstrong the same bet, but for $200,000, and a 15-hour time limit.

Armstrong is yet to respond.

In the meantime, Bilzerian has started a vigorous training regime.