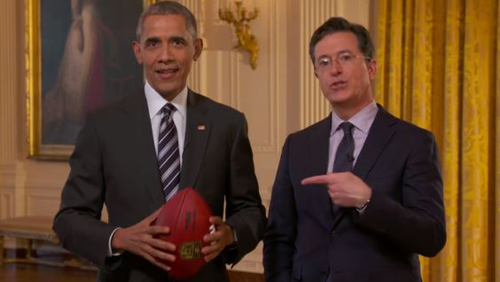 The president of the United States has spoken. And apparently, the leader of the free world is not against sports betting?

During an appearance on The Late Show with Stephen Colbert on Monday night, U.S. President Barack Obama made light of current status of sports betting in the country while talking about the Super Bowl 50.

“After every Super Bowl, I call the winning team to congratulate them,” Obama said, “and sometimes, I also call the losing team, especially if I bet on them.”

To which Colbert answered: “Sir, I hate to break this to you, but betting is illegal.”

The admission may be part of a skit on the popular talk show, but it also shows the how the president’s attitude reflects the changing tide towards sports betting in the United States.

In the state of New Jersey, gambling regulators don’t see any problem with online sports betting. In fact, Division of Gaming Enforcement director David Rebuck said he wants to see the state’s racetracks and casinos offering real-money sports bets in both land-based sportsbooks and via online betting sites.

Currently, the state is in the middle of a legal battle to allow sports betting within its borders. New Jersey is awaiting its rehearing with the U.S. Third Circuit Court of Appeals of its bid to overturn the federal ban on sports betting.

Late last year, the court announced it was vacating the August ruling by a three-judge panel after a majority of justices voted for a rehearing. Rebuck said a victory at the appeals court was far from assured, but the fact that the court agreed to re-open the state’s case “is probably the first time that we had a small victory in our efforts to date.” The appeals hearing is set for February.

Watch President Obama’s Late Show appearance in this clip. The segment with the commander-in-chief starts around the 5:50 mark.