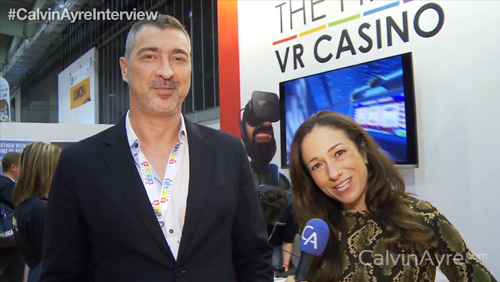 In this interview with CalvinAyre.com’s Rebecca Liggero, Slots Million co-founder Alexandre Tomic talks about virtual reality and the opportunities it can bring to the online gambling industry.

In an interview with CalvinAyre.com, the Slots Million co-founder explained the differences between these two sectors in the online gambling industry.

“We have the social gaming, where players basically don’t play for money but share a lot of the experiences. And we have the real-money players that basically, they play, but it’s almost like they do a shady thing. They hide themselves, you know,” Tomic told CalvinAyre.com.

The answer, according to the executive, lies in the relatively untapped technology of augmented reality.

“What we think that virtual reality is going to bring is the missing link between social gaming and real-money gaming,”Tomic noted. “We’re going to be able to design a place, a virtual place where these people can meet, where these people can play together. So we can see the social players looking at real players, how they play, maybe [it] will take one day, one week for them or one month and they will start playing for real money.”

“We build on purpose quite a small space because we want to have a lot of slots inside in one place, focus on slots and don’t lose themselves in the environment,” Tomic said. “It’s a multiplayer environment so you can bring your friends, you can speak with them and you can chat with them. We have support agents that are also inside. We also have these special place, it’s a big wall where you can play all the poker slots we have in the big mode. You take your iPad, you swipe it, you choose the game you like and you have it on the big wall.”

Slots Million has yet to incorporate the popular Oculus Rift googles, but Tomic said players can still play even without the googles.

“When you have the goggles, it’s immersive. You’re inside, it’s a very, very special experience, but we don’t have yet a consumer product which is ready. It’s going to come next year,” he said.

“I don’t think we’re going to see a rise of virtual reality and virtual reality in gaming next year. I don’t even think it’s going to come in 2017. As Mark Zuckerberg said, he believes in it but it’s, maybe, five, 10 years so there is no rush to invest in it, but you really have to watch it like milk on fire,” Tomic said.