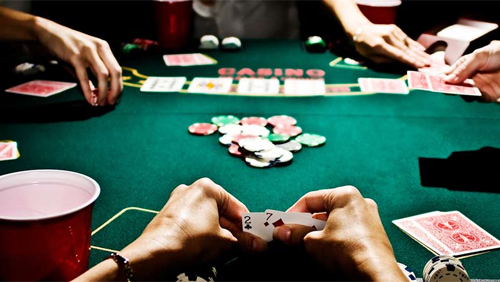 The aftermath of Antonio Esfandiari’s irresponsible actions at the PokerStars Caribbean Adventure, where he urinated in a container at the table, demonstrates the negative publicity poker can receive when professional players fail to act as role models.

The inaugural Global Poker League (GPL) is in full swing. Mediarex Sports & Entertainment have cut deals with some of the largest non-gaming sponsors in the world. Poker is about to go from whale oil lantern to full blown chandelier.

Michael Buffer stands in the centre of The Cube. A mic tumbles from the heavens.

“Tonight, we are going to witness the most anticipated match in the history of poker.”

The sound sliding south from the stands is vociferous.

“Poker fans. Are you ready?”

“For the thousands in attendance, and the millions watching on Poker Central, ladies & gentlemen, let’s get ready to rumble.”

The crowd goes mental; he sits down, reaches underneath the table, pulls out his man toy and pisses into a container.

Cue, sunken sockets on the face of Alexander Dreyfus as he quietly mutilates his body backstage.

In case you’ve been working in a coal mine for the past fortnight, let me get you up to speed. Antonio Esfandiari, one of the most recognisable faces in world poker, and the second most winningest live tournament player ever, carried out that very act to win a $50,000 prop bet with his friend Bill Perkins.

The Magician was playing on Day 2 of the PokerStars Caribbean Adventure (PCA) Main Event. He had a healthy stack of 115,000 chips. The Tournament Director (TD) learned of the leak and subsequently disqualified him from the tournament.

Not long after the DQ, Esfandiari sat down with PokerNews sideline reporter Sarah Herring to apologise for his behaviour.

There was a mixed response from the poker community. To some it was hilarious; others were disgusted. Those seeking sexual assault charges were a little off the mark.

I’ve spilled a few bodily fluids into containers before.

Would that be wise?

I would do it because, like Esfandiari, I am too dumb to think far enough ahead to consider the reach of my consequences. Esfandiari should know better. Thinking 50-moves ahead is his job.

I am a father; so is Esfandiari. The way we behave is incredibly important, and I am not just talking about the obviousness of our behaviours, I am talking about our values and our beliefs.

If we show the world that pissing in a container, in the middle of a tournament area, is acceptable, then those are the boundaries we are setting for our children. Debate it all you want. There is evidence everywhere you look. What we do, is what they do.

The Magician has always had the ability to pull endorsements out of his top hat. He piques interest wherever he goes. His ability on the table, and his off the table image, have courted those loving embraces. But now he has to act responsibly. It’s payback time. He needs to engender the values and belief of a sterling ambassador. Pissing into a container is not part of the deal.

“I am a new father now, and this is not the kind of example I want to set for my son,” Esfandiari said in his statement.

Nice to hear it.

But he has to do more.

As one of the game’s icons, Esfandiari is an ambassador for our game. He is no shrinking violet. He likes the media attention. It has made him a star.

He can use this leverage to grow poker’s audience. He should be supporting initiatives such as the GPL. He should be getting involved with One Drop and Raising For Effective Giving (REG). He should be a leader.

He might not want the responsibility that comes with the territory, but he has it whether he likes it or not.

The young Arsenal footballer Jack Wilshere has been caught smoking by the media on several occasions. He keeps getting fined. Not only is Wilshere, a role model for thousands of young children, and impressionable teenagers, but he is also a role model for the sport and the club.

That’s why the club fines him.

Neither did Esfandiari until his leak ended up as news on some of the top tabloid rags around the world.

I think it’s incredibly important for professional poker players to start thinking about the big picture. People like Alex Dreyfus are trying to push our game north. He needs help. This sort of thing doesn’t help. It makes us look like an amateurish gang of uncouth youths. There is nothing professional about these ridiculous prop bets.

The GPL is following the breadcrumbs left behind by professional eSports leagues. The major online poker operators are doing the same. Full Tilt recently moved onto the Steam platform and started sponsoring a pro-Hearthstone team. PokerStars have vowed to create a new game that merges what we love about poker and video games; Dreyfus has HoldemX.

eSports is where it’s at.

That’s where we need to be.

We want Mark Cuban investing in us.

Those young gamers are already role models. Kids from all around the world look up to them. They follow them.

They are stars in a young industry. They will make mistakes. Of that, you can be sure. But you can also be sure that their team managers will be impressing the importance of setting a good example.

Antonio Esfandiari is already learning from his mistake. He has pledged to donate his prop bet winnings to the One Drop Foundation and Raising For Effective Giving (REG).

Mistakes are good. Try being successful without making any. It carries a caveat, though. You need to learn from them. You need to fix your leaks.

A despondent Esfandiari told the press that on paper he had won his prop bet, but in life, he had lost.

Let’s hope that’s not the case.

There are a so many ways to donate to charity. Money is one. Then you have time. As a young father, operating at the peak of his powers, what better time to give back to the very profession that has afforded him so much in life.

Be a role model.

Help propel our game into a brave new world.