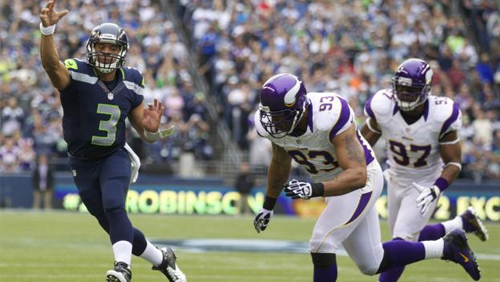 The Seattle Seahawks are peaking at the right time winning 6 of their last 7 games by a margin of 207-75. In the last 8 matchups, quarterback Russell Wilson has been unstoppable throwing for 25 touchdowns and only 2 picks along with just 1 fumble. The Seattle Seahawks running game has been more adequate even without their starting rushing back Marshawn Lynch who is a full go for today’s contest. Their running game has been averaging 145 yards per matchup during this period of time. Underappreciated starting wide receiver had a solid season catching 78 passes for 1069 yards along with 14 touchdowns.

The Seattle Seahawks defense have hold 3 teams to single digit points in their last 3 out of the last 7 games. In their first meeting {December 6th} right here at TCF Bank Stadium, the Seattle defense limited the Minnesota rushing

game to a pathetic 31 yards {1.9 yards peer tote} and their passing game to 94 yards {5.5 yards per catch}. An effective game manager for most of the season, Bridgewater was unquestionably terrible in that game passing for 94 yards completing 17 of 28 passes. Overall, the Minnesota helmsman ailed to reach 190 passing yards in 9 of 16 games this season. Meanwhile, Adrian Peterson mustered up a production of an 8-carry, 18-yard outing.

After that embarrassing performance versus the Seattle offense, the Minnesota Viking defense has been playing much better in the last 4 game only allowing an average of 17 points a game. Also, their offense has been hitting on all cylinders averaging 33 points a game in the last 4 encounters. Unless the Vikings can keep their momentum going on both sides of the ball; they will get soundly beaten by Seattle again.