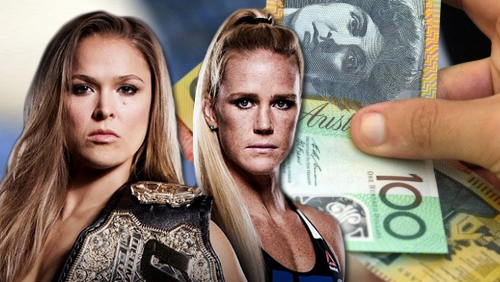 A betting ban was reportedly issued for a recent UFC event in Melbourne due to integrity concerns.

The Victorian Commission for Gambling and Liquor Regulation (VCGLR) refused Tabcorp’s request to allow wagering on fights at UFC 193 in November, The Sydney Morning Herald reported.

The event in question featured the title bout between Ronda Rousey and Holly Holm, which saw a record crowd of 56,000 at the Etihad Stadium in Melbourne. The fight also attracted a massive global television audience, who saw Rousey fall in a second-round knockout.

Rousey’s defeat, however, was not the gambling regulator’s concern. Rather, VCGLR believed that “UFC does not have appropriate policies or measures in place as required by Victoria’s gambling laws.”

The commission’s decision came amid warnings by law enforcement authorities that MMA was “vulnerable to corruption and money laundering by organized criminals.”

A spokesperson for the commission told The Age: “Any sport where there are two people competing against each other and where a betting agency is taking bets, is open to corruption. The risk of corruption increase where the betting agency operates offshore and is not under the regulatory environment of the VCGLR.”

UFC Executive VP Tom Wright told Fairfax Media they have staged a total of 40 events all over the world in the past year alone without a hint of corruption. In addition, Wright said UFC also has a global compliance unit that deals with “each and every complaint,” not to mention that all fighters are required to sign a code of conduct that the organization strictly enforces.

Tabcorp is the only wagering operator licensed in Victoria, but there are interstate and international gambling companies that are able to operate locally, which, incidentally, are the focus of a revamp plan headed by former NSW premier Barry O’Farrell.

Currently, there are 30 online gambling sites in the country and more than 2,000 international websites that are out of the government’s reach.