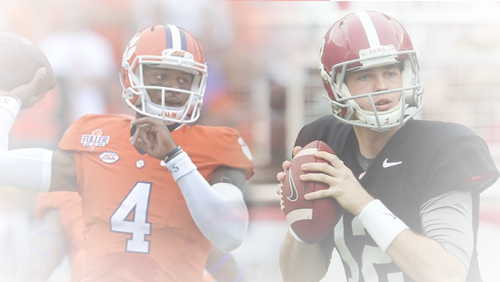 Line Alabama -7
Total – 52
Much has been made about the Alabama Crimson Tide offense with Heisman Trophy Derek Henry winner and the uprising of their quarterback Jake Coker and the blazing speedster wide receiver Calvin Ridley, but it  is the defensive front seven that dictated their successful season. This defense for Alabama uses different schemes but heir “bread and butter’ position is the 4 5 2 set position. This particular scheme takes away the deep ball of their opponent and limits long gains going underneath thus making their font 4 tough for their opponent to gain any yardage either by running the ball or throwing the pigskin.

The Crimson Tide defense will have their toughest challenge since allowing Mississippi’s passer Chad Kelly to throw for 341 yards and 4 touchdowns on September 19th in their worst effort of the season losing 43 to 37. Alabama’s defense will even face a stiffer test when they meet Clemson’s quarterback DeShaun Watson, who is a duel threat with his legs and arm. Sophomore helmsman Watson has completed 287 of 413 throws for 3,512 yards and 30 touchdowns.  Additionally he has 887 yards rushing in 163 attempts and has 11 rushing touchdowns. He is the only player in the nation with at least 800 yards rushing and 3,500 yards passing. In fact he is the first player to do it since 2012 (Johnny Manziel of Texas A&M). Logic will have it, Watson’s god gifted speed will outweigh the Crimson Tide’s weight of the defense. The offensive line has been a big reason Clemson has had 10 games of at least 200 yards rushing, including wins over Louisville, Notre Dame, Georgia Tech and Florida State.

The Clemson Tiger defense is ranked 7th in the nation overall. Let’s take a closer look at this defense.

The Bottom Line: I have no worries about both offenses scoring more than “decently”, but it’s both defenses that put a damper on my selection. The realistic wager is the “over” for 2 reasons. 1. Alabama’s is ranked 32nd in scoring offense at 34 points per contest. 2. Now here is my primary problem with the Tiger defense, they allow 124 rushing yards a matchup. What bothers me is will Derek Henry gives his all in this game knowing millions of dollars awaits him in the NFL?