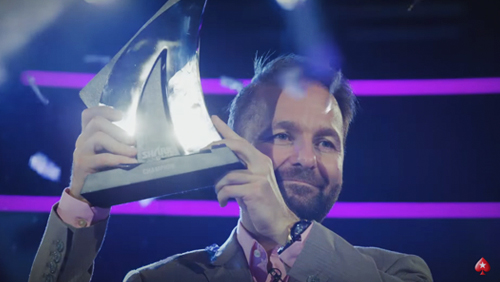 Daniel Negreanu is the PokerStars Shark Cage Season 2 winner after defeating Phil Ivey in heads-up, to take the trophy and $966,000.

It’s been an interesting few days.

PokerStars Team Online member Alex Millar resigned his position over his employers treatment of the VIP grinders, a few supporting voices ask Daniel Negreanu to also quit, and meanwhile, the face of Stars is winning the PokerStars Shark Cage for $966,000.

Season 2 of the PokerStars Shark Cage was history in the making. It was one of the most glittering final tables of all time. It was bound to generate a superlative heads-up. Everyone hoped it would be Daniel Negreanu versus Phil Ivey. When Ivey eliminated Maria Ho in third place that’s exactly what happened.

“Ok, boss,” replied Negreanu. “Let’s play some poker…it’s been a long time…have we played heads up before?”

“No, you always get knocked out before me.” Replies Ivey.

It was the first time the two titans of the poker world had ever faced each other heads-up in a tournament. It’s a shame it happened in this format. To be fair to the pair, they did everything in their power to make it the spectacle we all wanted to see. They both made moves. They both smiled. The banter was top notch. Even Ivey’s Mum was watching from the rail.

So why did it all seem a little off?

Televised poker has lost that pizzazz.

Ivey had him covered, and needed an ace or queen to win.

Both players checked and Negreanu took the pot.

Silver stuff fires out of a cannon and drowns them both. You can barely hear a whimper from the rail. Just like that, Negreanu dodged the six and became the second winner of the PokerStars Shark Cage, in what was supposed to be the most eagerly anticipated match up in recent poker history.

Let’s hope the next one is a little more exciting.