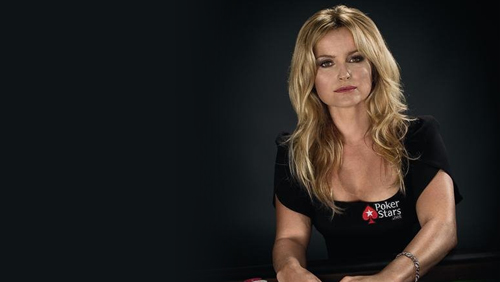 *What follows is an abridged version. For the full interview listen to the audio.

Fatima Moreira de Melo is an Olympic gold medallist in women’s field hockey and a member of Team PokerStars SportStar. But you know that right?

What you might not know is Fatima is an ambassador for Right to Play, a charity that believes one of the best ways to educate children in third world countries is through the powerful art of play.

What follows is the abridged version of our interview where she talks about her recent trip to Uganda, her thoughts on the hypocrisy of society when it comes to giving, and what she would do if she was given 10,000 hours to focus on anything.

In the full audio interview we go deeper into the hedonistic views of most of the world, what her opinion is on the view that some people believe being an ambassador of poker is a lousy job and so much more.

Describe your experience in Uganda?

“First of all Right to Play is a charity that helps kids in third world countries to develop their life skills through sports and games. Being a former athlete and professional gamer it fit my profile. They are also big in Holland. My boyfriend went on a field trip with them because he is also an ambassador so I have always known what kind of work they do.

“I have always been impressed with them but also a little sceptical. They are called Right to Play and I was always thinking why aren’t they called Right to Eat not knowing what they were really doing. I heard PokerStars were helping them out and they asked me if I wanted to be an ambassador for them, I found out more about the foundation, was really impressed and went on a field trip to Uganda.

“That’s when I really started to understand what they do and why they do what they do. The culture in Uganda has developed in a way that is not productive in a lot of ways. To be there and to be surrounded by that was extremely frustrating. I remember thinking, “what the fuck are these people doing?”

“There are local trainers there and they train their own local people to help. I think this is a good thing. They don’t get paid anything for it, which seems hard to me, but it works for them. So we got to know the people who were potential trainers for Right to Play. The level of development was shocking when we first met them.

“There were 35-40 people, half men and half women, and its all about teaching people to communicate. Someone asked, “Who knows how to use a condom?” Only one person raised their hand. They started giggling, and I thought, “what the fuck?”  AIDS is still a big cause of death, high teenage pregancies and rape. I didn’t know to what extent it was a problem. In Europe we seemed to be dealing with these issues, and although I knew it exists and it was likely to be a problem, I had no idea how big a problem it was.

“Abortion is also illegal in Uganda. It happens in our culture as well, but to imagine a country where HIV is such a huge problem and people don;t know how to use a condom. It’s bizarre. It’s a taboo to talk about these things and they are trying to teach the kids to think differently.

“We went to a school to talk to the kids. They told us that one little boys parents had died of Aids and his grandmother took him in but she thought his parents and him were bewitched because of the HIV. She wouldn’t let him go to school, she wouldn’t feed him,a nd Right to Play people had to go to her house to explain everything. They had to take the child into school so he could be fed, because they can’t always afford to feed people at home.

“The schools can’t afford to feed all of the children even though they are gvernment owned. They have to ask the parents to contriute and a lot of them can’t afford it. The schools are in a spot where they can’t afford to fed 50% of the kids. There iare dilemmsas like this evetywhere. When you talk to the adolescents there. They play a game and then they refelct on the game and apply what they have leared in real life.

“They are taught to address situations in real life. For example if you fall down in the game, what do you do if you fall down at home, if you have a problem at home who do you talk to? It then goes deeper than that. We ask the girls what happens if a guy approahces you for sex what do you do if you don’t want to? One of the replies was use a condom, instead of just saying no.

“The kids were 12-13 and they were giggling about it. It’s difficult for them. It’s a culture where women are not in the same position as men. It’s hard for them to say no. It’s so distorted and this is why Right to Play are trying to teach them because otherwise the next generation is screwed. We want to get to the point where a young woman is strong enough to say I don’t want sex.

“Some of the adolescents were more advanced than some of th adults we met. On the other hand, as soon as you make children more aware they strat to see the shit that surrounds them and the dysfunctional enviornment they are in and that causes problems.

“I have to say I left there with so much respect for the people who keep going at it. They are making small steps, and the kids they help are becomeing more aware about life skills, not afraid to speak to a teacher or a ERight to Play leader. It’s a little safe haven they are trying to create that creates an enviornment FOR safety development.”

Was you worried about going out to Uganda?

“I was a little worried about Ebola but I was told it was a safe zone. We got to out hotel and there are guards with shotguns so you get that safe and usafe feeling at the same time. It’s not great, and when you are walking through the slums and little five years are carrying babies on their backs to go to school, all dirty, it’s painful to see. I wasn’t that aware that HIV and rape was such a huge problem out there. I thought it was more disease and poverty.

“I am always sceptical about field trips. It costs money to send us out there so it’s important that they get a return on investment. On the other hand, I am a Right to Play ambassador in Holland as well, and I am able to speak about the problems with more clarity now I have been to Uganda.”

Did it change you?

“It hasn’t really. I know that our society is pretty hyopocritical in general. In Holland we have this thing once a year wher radio DH’s dont eat for 10 days and they are stuck in this glass house. They have this charity that everyone donates to and they do for 10 days. But we could do this all year around and we could live with probably a tenth of what we all owne and kids all over the world could be heped. We choose not to do that. We choose not to think about that. I am one of those people even though I have been there. I am still not giving 90% of all I have to help people, so that’s hypocritical in a way.”

There needs to be balance though, otherwise you would end up living in a shack, and giving everything away.

“We all have our hedonistic needs. We all want to live comfortably and unaware of all the shit that happens around us because we want to be happy. The longer I am on this world the less materialistic I am becoming. I don’t need much to live.

“I have a lot of shirts. I don’t need more shirts. There are people who are hypocritical about kids working in sweat shops, but if the kids don’t work there they are screwed so there needs to be another solution. We can all do better than we are and we all know it. We need to be aware. We need to happy and realise we have a great life. I was very lucky I was born in Holland.”

People need to think more. There are some that ignore the state of the world and some that are clueless. When you go to Uganda your thinking expands more and you can spread the word.

“I think it’s creating awareness. I recently watched Cowspiracy on Netflix and it makes you more aware about what we are doing to this world. We are parasites and as long as we realise this we can make different decisions. It made me think. If I order a Pad Thai now I order a vegetarian one because I don’t need to eat chicken. We should think. We should also teach kids in school all of the theories that surround them in our society and I don’t think they get taught that way.

Give my teenage son some advice now he has a girlfriend

“In any relationship you are going to run into some things you don’t like about them. I think you need to focus about the positives in the relationship and in life. Go with it, give it a go, and try to enjoy it and ask for some condoms.

“If you ever cheat on her it doesn’t make you a bad person. Try not to because she won’t like you, but it doesn’t make you a bad person, it’s something that nature gave us and society decided not to accept because it creates chaos with all the kids running around and we don’t know where they are from and who pays for them. Just enjoy your first girlfriend experience.”

Fatima Moreira de Melo: Inside The Mind And Heart of an Olympian
Lee Davy
18 July 2016
.