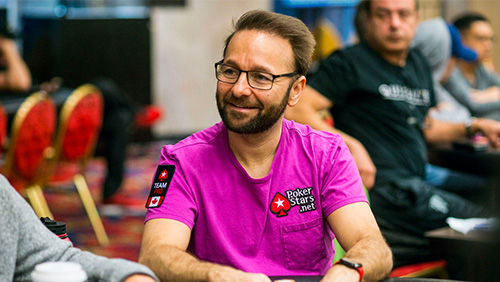 A collection of stories with a hint of PokerStars essence including the signing of Dmitry Guberniev, Daniel Negreanu hitched, Andre Akkari on his friendship with Neymar, and Fatima de Melo Moreira on the ever-growing confidence of women.

People collect rubbers. Not the things you put on the end of your penis to prevent sexually transmitted diseases and unwanted babies, but the ones that you use to rub out your mistakes in school (posh people call them ‘erasers.’)

On a side note, one of the hardest parts of the ‘birds and the bees’ chat with your child is explaining the role of rubbers.

“Why would you wear a rubber if you only have sex when you want to make a baby?”

Yeah, it was an ‘ask your mother question, for sure.’

Back to the point – people collect rubbers, some collect teeth, and there are even people who collect different types of shoe polish.

I collect stories about PokerStars.

The first one arrived in my email inbox on my way back from Montenegro. It’s the news that Dmitry Guberniev has become the latest addition to the PokerStars payroll.

Guberniev is a Russian sports commentator and presenter who recently commentated on the Eurovision Song Contest in Tel Aviv, and he slots into the PokerStars fold as a ‘PokerStarsSochi Ambassador.’

The appointment comes ahead of the PokerStars European Poker Tour (EPT) Open in Sochi, which takes place Oct 4 – 13 in the Casino Sochi on the coast of the Black Sea, and Guberniev’s primary purpose is to drum up interest in PokerStars’ “Win a Trip to Sochi” media campaign.

Here is his first ad.

Players can enter the competition for free at PokerStarsSochi.net, and the winners lock down a six-night stay at the resort including one seat into the EPT Open Sochi Main Event – the highlights of which are as follows:

The first day at the office can be as uncomfortable as interviewing an ex-convict.

If Guberniev does feel slightly awkward, then before reaching for the Sloe Gin Fizz, he should have a chinwag with these three PokerStars stalwarts.

Daniel Negreanu has sat on the ambassadorial throne longer than anyone in the industry, and this week the hockey-loving, Twitter battling, sharp suit wearing PokerStars chief tied the knot.

Negreanu wed Amanda Leatherman in a ceremony attended by poker’s bigwigs (I assume my invite got lost. I move around a lot), and the pair looked positively divine.

It’s the second time that Negreanu has slipped a ring on someone’s finger, and in my book that’s good news for Leatherman, because it means he will be twice as great of a husband as he was the first time around.

The rumours of Amazon packages containing newborn babies left on his doorstep while the pair said their vows are unfounded.

What an EPIC night! Honestly couldn’t dream up a better wedding. Thanks to all the friends and family who made the trek out to be there with us. I’m in love. In Love with @radioamanda. In Love with life! #ALovesTheD

Negreanu may be PokerStars rock n roll star, but he’s not fit to lace the boots of Andre Akkari when it comes to poker popularity in Brazil. Akkari, who is so famous in that neck of the woods he once carved out a deal with Puma, has recently been talking to The Mirror about his relationship with Neymar Jr.

In the piece, Akkari talks about his shock when he heard the Paris St Germain (PSG) ace talking about his love for poker, referring to Akkari as his ‘poker idol’. Akkari reached out, and the pair have been poker buddies ever since, with Akkari appearing in Neymar’s home game alongside the likes of Gabriel Jesus, Lucas Lima, Arthur and Nene.

“It’s great to have a relationship with one of the top performers in the world,” said Akkari.

Check out the full interview, here.

The Mirror conducted the Akkari interview during EPT Monte Carlo, at the same time Fatima Moreira de Melo sat down for a chat with Female First.

The Olympic gold medallist told the person with the microphone that her gold medal is in the kitchen drawer at home, and ‘doesn’t understand’ why someone would put it on display.

“I don’t need a medal to know what I have achieved in life. It’s not about that one moment; it’s about the process of how we got there that was exciting for me.”

De Melo talked about the lopsided male versus female quota at live poker events and urged women to gain more confidence and ‘throw themselves’ into environments like poker.

“There is no reason why a woman cannot beat a man at poker, other than the fact they might not believe they can or may not even think about trying.”

The Dutch star also pointed to the dating game as a barometer on how life is changing for the female of the species.

“Guys have always had different levels of confidence. They are the ones who have traditionally gone after the girls and chatted them up in bars and don’t mind too much when they get turned down. They are basically bluffing their way through that kind of situation and have the confidence to try it, but women have not needed to put themselves in that position too often. “Now things are changing. In our Tinder culture, women are taking more risks in life”

She’s right, some of the finest rubber collections I have ever seen have belonged to my female friends.​