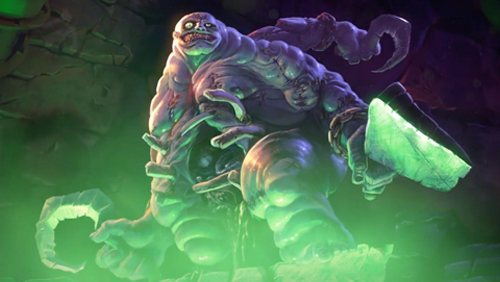 ElkY will compete at the PCA dressed as Sludge Belcher after losing a Hearthstone exhibition match against Daniel Negreanu at BlizzCon.

Are poker players going to start defecting to Hearthstone?

The smart money was on ElkY. The Frenchman joined poker as an elite StarCraft competitor, and has played Hearthstone a lot longer than his colleague, but that didn’t stop Negreanu from claiming victory.

I WON!!! Can’t believe it. It was so awesome being on that stage. I was so nervous and had a blast! https://t.co/ogognEKKaz

As you would expect, between two poker players, there was a prop bet at stake. It didn’t involve money. It affected dignity. ElkY will dress as the Hearthstone character Sludge Belcher when he competes in the 2016 PokerStars Caribbean Adventure (PCA) Main Event in January. Something tells me that ElkY won’t be too worried about that.

It was great to see the pair crossover into the eSports playground. It’s not bad for business. But will they ever decide to take on the challenge full time? In an interview with Forbes, Negreanu told writer Richard Proctor that he was ‘certain’ that professional poker players ‘wouldn’t leave their income to just play Hearthstone.’

In his post-match interview at BlizzCon 2015, Negreanu was asked if he would one day compete in the Hearthstone World Championships?

“I know how much dedication it takes to get to the World Championships, but I would love too. I have only been playing for six months, though.” Said Negreanu.

“I hope I could compete {for the World Championships} but I’m not sure of the time commitment.” Said ElkY.

That time commitment includes thousands of ladder games and hundreds of qualifiers just to make it through to the finals. It seems the grind is one of many similarities that exist between Hearthstone and poker.

One person who does know how to grind his way through to a Hearthstone World Championship title is Sebastian “Ostkaka” Engwall. The Na ‘Vi team member defeated Dylan “Hotform” Mullins by 3-0 in the final. It is the second time Hearthstone has held a World Championships. American James “Firebat” Kostesich won the inaugural event in 2014.

Engwall’s victory means that both the Hearthstone and World Series of Poker World Champions both hail from Sweden. There was a slight difference between prize pools, though. Engwall won $100,000, and Martin Jacobson gave 2.5 times that much money to animal charities after winning $10m.

And that’s why you won’t see Daniel Negreanu or ElkY showing up at BlizzCon as potential World Championship candidates in the immediate future at least.