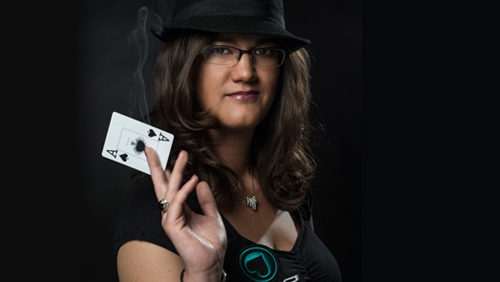 Eleanor Gudger talking about defending her WPT500 title, life after PKR and the important role that grassroots poker plays introducing female players to the game.

Eleanor Gudger is in a transitory period in her life. Fortunately, she owns that not so exclusive t-shirt.

The victim of a corporate decision by PKR to disband the Team PKR concept and move forward into a new era without, means Gudger is now on her own, figuratively speaking. I sense disappointment, but I don’t sense neediness.

She is a strong, determined woman, and one of the reasons she was able to become the WPT500 champion last year.

She didn’t manage to defend her crown, but that was good news for me as I got more chance to speak to her.

You are the reigning champion at the WPT500. How does that feel?

“Pretty good although it means right back to the start again. It’s nice to know you can do it.”

I was cursing you, though. There weren’t a lot of feature names here so I was expecting big things as you busted early.

“I didn’t make it to the end of Level 2, so we are on the second break today, so I am doing better today.”

PKR disbanded their Team Pro concept, what are your thoughts?

“I have played on PKR since 2007 and I still play on there. I like PKR and the community. It’s a shame they don’t have Team Pro anymore. I am sad to see it go, but I wish PKR all the best for the future.

“I always talked to players at the table and I had started where they had, from the pub leagues, and places like that. It was nice to come and play a WPT500 and meet PKR members who were playing their first live tournaments and give them advice. It was great for me and the PKR community.”

Daniel Negreanu posted his question of the day on Twitter. He wanted to know why there aren’t more female poker players in poker. What’s your view?

“I think a lot of it comes down to grassroots. There aren’t enough female players getting in at the early stages to trickle up. If you only have a few women playing in a grassroots pub league, for example, then it will be difficult for them to filter their way through all of the men.

“Introduce women to poker and they realise it’s more than just a lads night out, they get into it. A lot of people will have fun and understand it’s a great activity, and alternative to stay in and have a home game rather than going to the pub.”

Do what you love or do what you need to do to earn money?

“I made a big life change a few years ago moving out of London where I was working. I was getting paid well, and London has a lot going on. I needed time with my partner and so we moved out to accomplish that. He works flexi-time, and so do I. We get a lot of time together and that’s important. If you are spending a lot of time on money, you will lose out on that.”

Is it difficult to find that balance?

“It’s something that you need to take a step back and look at. If I get involved in something, I am in it 100%, but you do need to step back and analyse your priorities. It’s not all about money. Family and friends are crucial.”

Are you a planner or someone who lives in the moment?

“I used to be very organised and a planner. As I age, I become less like that and instead I do more things that I enjoy. Just because you have a plan doesn’t mean you have to stick to it. I like to spend money on experiences instead of material things.”

If you had 10,000 hours to work on anything what would you choose and why?

“I would stick with putting more time into poker. I love the game and there is always so much more to learn, so many games, formats – it’s never ending.”

Give my teenage son some advice

“The most important thing at that age is that no matter how dull you might find school, stick at it and do the best you can. You don’t want to look back when you are older and wish you worked harder, because the time to do that is now.”