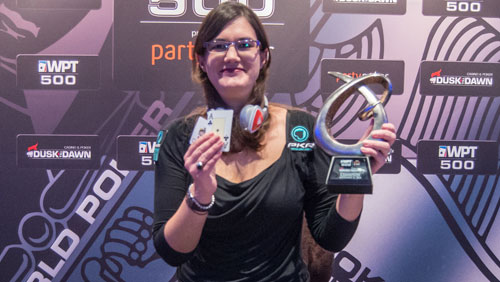 Eleanor ‘Elz442’ Gudger has taken the top prize in a gargantuan WPT500 in Nottingham’s Dusk till Dawn (DTD), after defeating Matthew Noonan in heads-up action.

The plan was am ambitious one for DTD owner, Rob Yong, and the team at the World Poker Tour (WPT). A £1m Guarantee was set, and 2,133 entrants made sure that neither party ended up with the proverbial egg on their face.

It was a long and arduous journey for Gudger, but one well worth the effort, as she adds £140,000 to her bank account; her largest score by a country mile.

It seems to be a happy stomping ground for the PKR sponsored pro after recently finishing third in the United Kingdom & Ireland Poker Tour (UKIPT) Nottingham High Roller, for $62,336, back in May.

“Elz” is one of only four PKR pros: Roman “Trogvar” Khlan, Simon “Rhymenoceros’ Hemsworth, and Patty “BabyTes” Beaumier, making up that particular quartet.

The Gudger hammer came down on Derek Payne and Hamid Rowshanaei to set up a heads-up encounter against the relatively inexperienced Matthew Noonan.

Payne – who once finished runner-up to Chris Bjorin in a WPT Seniors Event at the Bellagio – saw two aces appear on the flop and river to cripple him in an AQ v JJ confrontation with the eventual champion. His final few big blinds going in, once again against Gudger, A5o v Q7o, with a seven on the flop sending Payne to the rail in fourth.

Hamid Rowshanaei would follow, in third, after the pair got it in on a board of [Kc] [7c] [3d] [5c]. Rowshanaei jamming with [Ad] [7d], for the pair of sevens, and Gudger all smiles with a turned set of fives.

Those eliminations gave Gudger a healthy 44.2m v 18.3m chip lead and she would take all of them after calling Noonan’s A9o shove holding AQo, and a chop-inducing [Ad] [Kd] [Ks] [5h] [4c], handed her the first significant title of her career.

“I’m just over the moon,” Gudger told the WPT after her win. “It’s such a huge field, over two thousand players, it’s just incredible.”