Krzysztof Stybaniewicz has won the largest prize of the 2015 World Series of Poker Circuit (WSOPC) series after earning $356,043 in the Main Event in Hammond.

I’m not sure what’s causing my brain to hurt the most. Pondering the thought of writing Krzysztof Stybaniewicz another 10-times, or the mammoth looking $356,043 that he earned for winning a World Series of Poker Circuit (WSOPC) event. 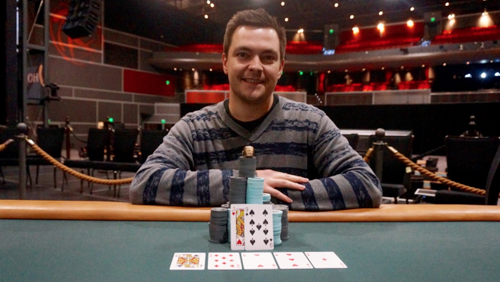 They love their poker in Hammond, Louisiana. 20,000 people live in that part of the world, and a large chunk of them decided to spend a few days competing in the Horseshoe Hammond $1,675 buy-in WSOPC Main Event. The total entries reached 1,376, creating a prize pool more than $2m, and six-figure awards were handed out to the top four spots.

Two of poker’s meanest competitors were at the final table, one finishing seventh, and the other nearly going all the way.

Kevin Saul has over $3m in live tournament earnings to his name, including a World Poker Tour (WPT) title, and WSOPC gold ring. In the summer, he was runner-up to Corrie Wunstel in Event #36: $1,500 Pot-Limit Omaha (PLO). He finished in seventh spot.

The star who nearly went all the way was Joe Kuether. He currently holds a Global Poker Index (GPI) ranking of #20, and #14 in the 2015 GPI Player of the Year (POY) race.

Kuether finished second in the PokerStars Caribbean Adventure (PCA) High Roller for a million bucks, took the same spot in a Venetian Deepstack Main Event for $109,877, before winning one for $167,423, and he also finished third in the World Poker Tour (WPT) Borgata Championship Main Event for $262,994.

The pair squared off in heads-up action, and the hand that halted proceedings saw Kuether calling an all-in bet by Stybaniewicz on a board of [Js] [8d] [2h] [3h], with Stybaniewicz holding [Jh] [9s], and Kuether holding pocket tens. The ace on the river preventing Kuether from earning his third gold ring, but he did walk away with the consolation prize of $220,848, taking his 2015 earnings to the $2.1m mark.