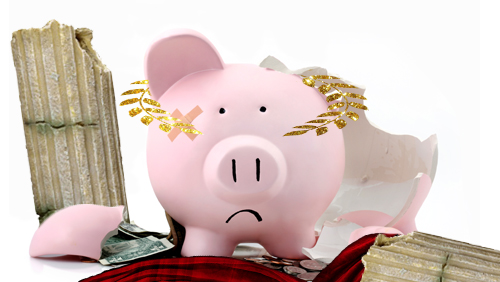 If you have inside information with judges and you know exactly how they are going to rule on the many appeals left in the Caesars court drama, then you can make a lot of money trading weekly Caesars options. But if you don’t, I’d say stay away and let the volatility be someone else’s game. Trading Caesars now would be, alas, gambling, a sort of four-dimensional hypercube of metagambling. Gambling on gambling.

Those who went short Caesars last September at $12.50 with 2016 LEAPS are still in the money with three months to go. If you haven’t covered yet, now’s the time. Aside from risking some pocket change on highly leveraged 2017 puts, which could be fun, there is no sense in trying to guess how a line of judges will decide each new detail of this case. There are still a lot more decisions to be made here. Each and every one will have an oversized effect on Caesars’ share price. It will be like trading binary options, which is a fool’s game.

Caesars’ defense, as far as I can tell, is basically the 2008 meltdown cataclysm defense that Wall Street banks and government sponsored entities used to get their hands on $700 billion of taxpayer TARP money and foreign banks used to get $16 trillion of clandestinely printed Federal Reserve money sprinkled all over the world. One would think they could just use the inflation to pay off the national debt instead, but that would make price inflation very obvious as all the dollars would pour into the US economy. So better to hand it out to foreign central banks.

Anyway, that multi trillion dollar display of outrageous profligacy without even having to answer to a single judge really puts the whole Caesars fiasco into perspective. Depending on how you want to count it, the most generous ratio we can give when comparing the 2008 bailouts to Caesars is 770:1, if we are counting Caesars’ entire $23 billion debt load, most of which is no longer even on the parent company’s balance sheet. So on the one hand, we have seen bailouts orders of magnitude larger than what Caesars needs to survive. As of last Friday, they are arguing over a $225 million interest payment. (If you want an entirely new perspective on how $16 trillion compares with $225 million, watch this video.)

How does the meltdown cataclysm defense work? Easy. You claim that regardless of contract law, no matter what you signed and no matter what you actually owe, if you are forced to pay it, the world will come to an end. This is essentially what Caesars lawyers said on October 16 in front of U.S. Bankruptcy Judge A. Benjamin Goldgar, warning that allowing junior creditors to sue the parent company will create “one of the biggest messes of our time”. That’s the defense. That it will create a big mess. There’s nothing else they can say really.

Back on October 8th, Caesars lost an appeal that would have halted lawsuits against the parent company where all the assets are. That doesn’t mean that Caesars has to pay, just that the lawsuits can continue and won’t be stopped procedurally. That’s one sign that these judges are not falling for the meltdown cataclysm defense yet. It is also a sign that the junior creditors that are filing these lawsuits will not be satisfied with an equity bone in the Caesars real estate spinoff. And a bone it is, because what the junior creditors are being offered is 18% of what they are owed in new equity, and that is a best case scenario.

Caesars real strategy here, while it argues the Hail Mary meltdown cataclysm defense, is really to just wear down its opponents in court proceedings until they give up. The next big decision in that direction will be made tomorrow, Wednesday October 21, when the US bankruptcy court in Chicago will decide whether to extend the time Caesars has to file a restructuring plan from November 15 to March 15. Caesars claims, in very diplomatic language, that the four month extension will “help efforts to bring its junior creditors on board with the proposal”.

Well yes, in a manner of speaking it will “help” bring them on board by wearing them out to the point where they would rather get 18 cents on the dollar instead of waste their lives away in some court room arguing for the rest of it. If Caesars gets this extension tomorrow, the stock will likely jump again. My guess is they will get the extension, because I think what the judges really want to see is the two sides work out a deal, and would rather not cause a feared “meltdown cataclysm” that Caesars insists will happen if it is forced to pay more than 18 cents on the dollar to juniors who are the only holdouts here.

What would the meltdown really look like? It would be a transfer of assets from Caesars equity holders to Caesars junior creditors. Caesars would be forced to liquidate their assets and sell them to some other casino in a fire sale. The money would go to creditors, and the capital would be consolidated into some other company, or a combination of other companies, or Caesars in its entirety would be sold to a new owner. Nothing would be destroyed. All the capital would simply shift titles. There would be no cataclysm.

It seems that the judges involved in this case are playing both sides, trying to wear down both sides until they come to an agreement. On the one hand, they are allowing lawsuits against the parent to proceed, threatening Caesars. On the other, they look likely to allow extension after extension to Caesars, threatening junior creditors. We’ll see tomorrow if the extension until March 2016 for Caesars will be granted or not. If it is, then it looks like eventually some kind of deal will be reached as the junior creditors give up and settle for what they can get.

Because in the end, this is not about contracts or justice. It’s about forcing the sides to settle by leveraging time.