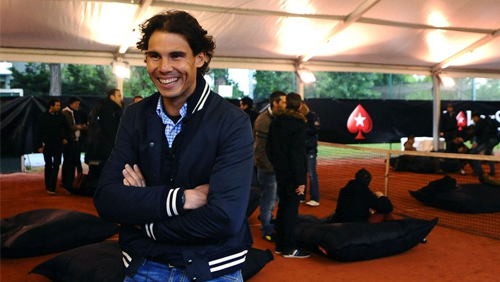 Tennis legend Rafael Nadal, and PokerStars, have parted ways after three-years as an ambassador for the world’s largest online poker room.

The man who won 14 Grand Slam titles by the age of 28 is currently competing in the China Open in Beijing, where he will face the American Jack Sock in the quarterfinals on Friday. You won’t find any news of his departure on Twitter, or in the national press. The only way I found out was because I noticed his mugshot had been removed from the PokerStars Team SportsStar page.

And that’s always been the problem with a signing like Rafael Nadal. I’m not privy to the kind of metrics PokerStars use to gauge the success or failure of a sponsored player/ambassador, but it was rare to find any association to poker on his social media channels, even less coverage in the national press – and my biggest sore point – he never really played any poker.

He wasn’t hired to play poker, but poker is the game that breaks down barriers. It’s a class breaker. It’s one of the only arenas where you will be able to sit alongside world-class celebrities and sportsmen, play poker and have a chat.

It was fantastic to see Ronaldo going deep in the PokerStars Caribbean Adventure (PCA), it was even better to see Neymar Jr. jump into several events at the European Poker Tour (EPT) in Barcelona as well as popping into the World Series of Poker (WSOP). The only time you saw Nadal playing was with the likes of Vanessa Selbst, Daniel Negreanu and a range of celebrities.

It seemed to me that the only people who were aware that PokerStars sponsored Rafael Nadal were people within the poker industry. I also heard on the grapevine that his wages were astronomical, and so when they signed Neymar Jr & Cristiano Ronaldo (who cannot be cheap), I guess it was inevitable that Nadal would leave at the end of his contract.

“Rafa Nadal has played an important role for our brand and while his time as a member of Team PokerStars SportStars has concluded for now, we remain close to him and his team. Our strategy and work with Rafa has led our strategy to evolve, and consequently, our current focus in on working with Cristiano Ronaldo and Neymar Jr.”

So come on Cristiano, put on those tighty whities and play some poker with the rest of the mob. We don’t need another Rafa.