Home / Poker / Ronaldo Outlasts All PokerStars Pros at the PCA 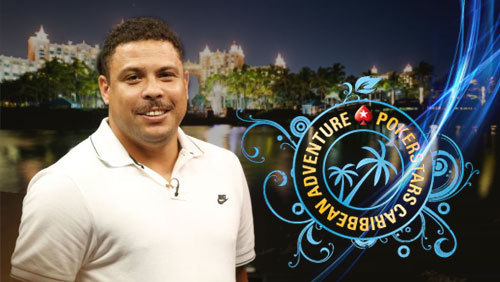 When Miroslav Klose hit the back of the net in Germany’s 7-1 massacre over Brazil, in the summer, he overcame the Brazilian legend Ronaldo as the record scorer in World Cup Finals history.

So what do you do when you are retired, and someone pinches one of your outstanding records?

Well, if you are Ronaldo you find something else that you can be competitive in. Something like poker. It was April 2013 when PokerStars announced it was adding the huge name of Ronaldo to its Team PokerStars SportStar roster. The legends of the sporting world, past and present, are not hired for their poker skills, but when a deep run in a major tournament, coincides with their popularity and fame, you have headlines that will hit the newsstands all over the world.

At the time of writing there are 40 players left in the $10,000 PokerStars Caribbean Adventure (PCA) Main Event, and the only member of the PokerStars team still left in the competition is Ronaldo. Jason Mercier, Jonathan Duhamel, Naoya Kihara, Liv Boeree, Daniel Negreanu, George Lind, ElkY, and Andre Akkari have all cashed, but it’s the Brazilian who will be taking home the highest sum of all.

To illuminate those headlines even more, Ronaldo should be in Switzerland, handing over the Fifa Ballon d’Or to his namesake Cristiano. The young Portuguese wizard has just beaten Lionel Messi and Manuel Neuer to win the award for the second year in the row.

So just how far can Ronaldo go in this one?

His good friend, and mentor, Andre Akkari believes he can go all the way. Speaking to the PokerStars blog he said: “I think he can get to the final table for sure. He’s playing tight. That’s one of the things I told him. I said, ‘Don’t call. Never call. If you decide to play a hand, raise.”

Unbelievably, Akkari told the PokerStars peeps that Ronaldo was nervous. Quite remarkable when you remember he is one of the most illustrious footballers in the games history.