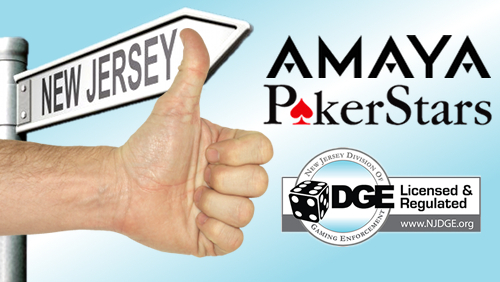 Late on Wednesday, Amaya announced that it had received formal blessing from the New Jersey Division of Gaming Enforcement (DGE) to operate both brands in the state’s regulated online gambling market. Amaya CEO David Baazov offered no specifics on when Stars and Tilt might launch in New Jersey, saying only that he anticipated providing additional details “in the near future.”

PokerStars has a longstanding deal to supply Atlantic City’s Resorts Casino Hotel with an online poker product that predates Amaya’s 2014 acquisition of Stars and Tilt. Resorts struck a separate deal with SNG Interactive to supply it with a casino product but Amaya now says it will provide both poker and casino offerings to Resorts. NYX Gaming Group took full control of the SNG joint venture after buying out UK partner Sportech this spring, not long after Amaya took a $10m stake in NYX.

Baazov was relieved to have received the DGE’s blessing after a prolonged investigation that many suspected had been subject to political interference. Baazov thanked the DGE for their “thorough and fair review of our business,” which Amaya says involved interviews with over 70 individuals and visits to half a dozen jurisdictions in which Amaya conducts its affairs.

News of the approval came on the very last day of the third quarter, thereby fulfilling Baazov’s prediction in March that Stars would get the nod before the end of Q3. Amaya’s shares had begun Wednesday’s trading just under $23, well below its nearly $37 peak in July, but the stock started rising mid-afternoon, eventually closing up nearly 6% to $24.33.

As for what impact Stars and Tilt will have on New Jersey’s market, expectations are mixed. The market remains finite and most of Stars’ early traffic will come from players already registered on the state’s other regulated sites. It remains to be seen whether the power of the Stars brand – absent Stars global liquidity – will be enough to attract fresh fish. Regardless, Amaya’s US ambitions remain dependent on the glacial state of legislative progress, with nearly three years having passed since any state legislature approved online gambling within their borders.