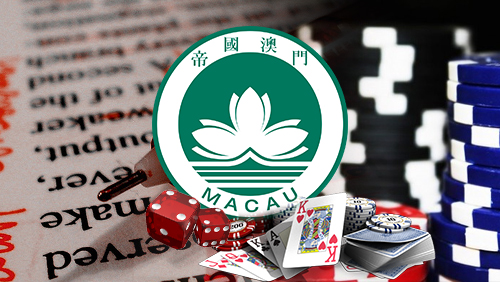 Macau’s Gaming Inspection and Coordination Bureau (DICJ) said Monday that the revision on the Administrative Regulation No. 6/2002, which regulates the conditions and procedures for issuing a license to junket operators, will focus on introducing new requirements regarding the capital and shareholding structure of junket operators.

DICJ also considers having the staff in charge of junket’s financial operations to go through suitability check and making information about the gaming promoters available to public such as name of the administration, shareholders, key employees and collaborators, to guarantee the junket’s suitability, leading to more transparency in the sector.

The gaming regulator said on Monday that it would also analyze the city’s gaming regulation in detail, “aiming to improve it and support the sustainable development of the gaming sector”.

The DICJ, on Dore’s theft case, reiterated that “only preauthorized credit institutions are allowed to run businesses involving public savings and funding. The bureau also said that the existing law only recognized shareholders and executives whose engagement in the junket business has been approved through a scrutiny,” adding illegally accepting deposits from the public is a criminal activity.”

Macau’s Secretary for Economy and Finance, Lionel Leong Vai Tac said that the different government departments are following up the case according to their administrative responsibilities. Leong has also met with representatives of the city’s six casino operators and proposed an enhancement on monitoring and supervision of junket groups that work in their properties.

Leong also added that government is also closely monitoring the evolution of the city’s gaming industry and striving to improve the existing regulation and supervision mechanisms.

In January, analysts forecast a slight increase in overall casino revenue after the 2.6% decline in 2014, but the estimate kept sliding throughout the year.

China’s crackdown on graft and the slowing economy have forced high rollers to lay low. Looser travel restrictions on Chinese nationals and a possible easing of a proposed smoking ban might have boosted optimism. However, a yuan devaluation, government clampdown on money flows and the latest scandal of alleged fraud committed by a junket operator employee added concerns to the gaming industry.

Analyst from Nomura Holdings Inc Richard Huang said that the Dore’s scandal “gives an additional reason to dislike the overall Macau gaming space because of the potential overhang,” forecasting a 31% decline in 2015 and a 5% growth in 2016.

Switzerland-based UBS is also cutting its forecasts for Macau gross gaming revenue for this year, seeing a 34% decrease from 30%. It expects a 2% and 6% for 2016 and 2017, respectively.

“While we believe macro uncertainty in China remains the biggest overhang on Macau outlook, and while there could be more downside risk to higher end gaming and premium mass, we believe grind mass in Macau has seen some minor signs of stabilization beginning in Q2’15,” UBS said in a note. “We saw further signs of stabilization in August with gross gaming revenue in Macau coming in better than what Street expected, with mass gaming showing sequential improvement.”

UBS said it expects the modest recovery to come second half of 2016 and mass gaming to start showing positive year-on-year growth by the first quarter of next year.

Meanwhile, analysts at Wells Fargo say that based on channel checks through Sept. 20th, they expect GGR for the month to be down 30%.